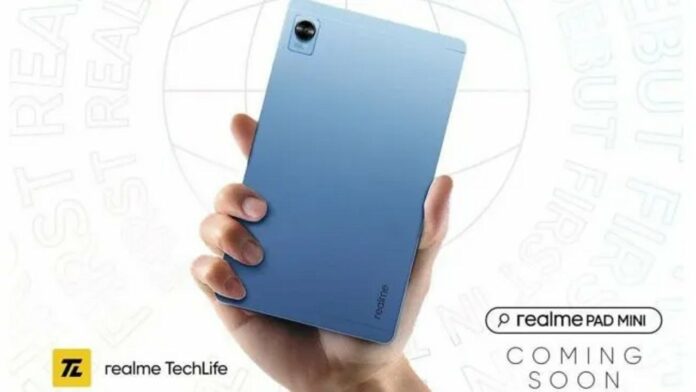 Realme Pad Mini has been confirmed to launch in India soon. The company announced the tablet in the Philippines earlier this month.

A microsite for the Pad Mini is now already live on Realme’s official site and the Flipkart e-commerce platform. The website comes with a message “coming soon”. It suggests that the tablet will launch in India in the coming days.

The Realme Pad Mini comes in two variants. It is priced at 8490 pesos (Rs 12,490 approx.) for the 3GB + 32GB model. The top end model with 4GB + 64GB storage is priced at 9990 pesos (Rs 14,700 approx.). In India, the phone is likely come with similar pricing. The tablet comes in Grey and Blue colours. Also, there will be same specifications as the version sold in the Philippines.

The Realme Pad Mini sports an 8.7-inch HD display with a resolution of 1340×800 and a screen-to-body ratio of 84.59 percent. Further, the side bezels are thin, but the top and bottom of the tablet are slightly thicker.

Moving on, the tablet is powered by the Unisoc T616 chipset, a 12 nm chipset with Mali-G57 GPU. Further, the chipset is coupled with 3/4GB of RAM and 32/64 GB of in-built storage. The storage is expandable via microSD card up to 1TB.

In addition, the tablet is backed by a 6,400mAh battery and will support 18W fast charging with reverse charging. It runs Android 11 with realme UI for Pad.

The device sports a slim profile of 7.6mm and weigh 372 grams. It measures 211.8×124.5×7.6mm. For the optics, the front side has a 5-megapixel camera for selfies and video calls with an f/2.2 lens. Additionally, its rear side will feature an 8-megapixel shooter.