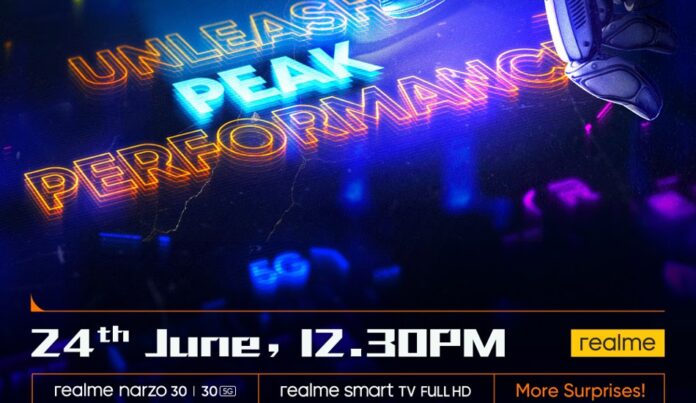 The Realme Narzo 30 4G was announced in Malaysia last month, while the Narzo 30 5G was launched in the European market a few days later.

Realme has today announced that it will launch Realme Narzo 30 4G, Narzo 30 5G and Realme 32-inch FHD TV on Thursday, June 24, 12:30 P.M. The event will be broadcasted on Realme’s social media platforms – Twitter, Facebook, and YouTube.

The Realme Narzo 30 4G was announced in Malaysia last month, while the Narzo 30 5G was launched in the European market a few days later.

In addition, Realme will also be launching a new Realme Smart TV Full HD 32” which is high on looks and picture quality and comes with an ultra-bright FHD display feature and Quad stereo speakers. This helps in making the sound more stereoscopic and clearer. This Smart TV re-emphasizes Realme’s aim and commitment to be the most popular tech lifestyle brand in India and become India’s No.1 online Smart TV brand.

Realme Narzo 30 comes with a 6.5-inch Full HD+ display with a resolution of 1080 x 2400 pixels, up to 580 nits brightness and a 90Hz refresh rate. It comes with a triple rear camera setup with 48-megapixel primary sensor with f/1.8 aperture, LED flash, 2-megapixel B&W portrait camera and a 2-megapixel MP 4cm macro sensor with f/2.4 aperture. It has a 16-megapixel front camera sensor for selfies and video calls with f/2.1 aperture, Sony IMX471 sensor.

Realme Narzo 30 runs on Android 11 with Realme UI 2.0 out of the box. It packs a 5000mAh battery with support for 30W Dart Charge fast charging that can charge the phone up to 50% in 25 minutes and 100% in 65 minutes. It comes with a side fingerprint scanner. The phone is powered by octa-core MediaTek Helio G95 SoC paired with 6GB of RAM and 128GB of internal storage.

Realme Narzo 30 5G is backed by a 5000mAh battery that comes with 18W quick charge support on the battery front. The handset runs on Realme UI 2.0 based Android 11 OS.  It is powered by a Dimensity 700 SoC coupled with 4GB RAM and 128GB storage. For security, it has a side-mounted fingerprint scanner.

Earlier Realme CEO Madhav Sheth had teased the launch of the Realme 32-inch TV. Realme TV will feature a FHD 1920 × 1080 pixel resolution with a 85% NTSC color gamut. It will also have chroma boost colour engine support, 400 nits brightness, and 24W quad stereo speakers. It will run Android 9, and it will also have a built-in Chromecast.