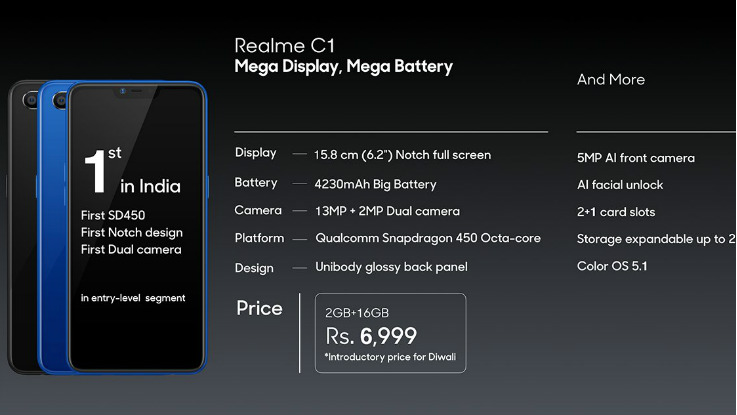 The new versions of the Realme C1 are up on Flipkart with the official prices and have been labelled as “coming soon” with no-cost EMI options starting from Rs 1,250 per month.

A month after being available for open sale in India, the Realme C1 has now been announced in two new variants in India. The device will soon be available for purchase in 2GB + 32GB and 3GB + 32GB versions for asking prices of Rs 7,499 and Rs 8,499 respectively through e-commerce site Flipkart.

The news comes from Realme’s official twitter handle which introduced the two new variants of its entry-level smartphone. The new versions of the Realme C1 have also popped up on Flipkart with the official prices and have been labelled as “coming soon” with no-cost EMI options starting from Rs 1,250 per month.

The Realme C1 features a 6.2-inch notch Fullscreen display with a screen resolution of 1440 x 720 pixels and an aspect ratio of 19:9. The Realme C1 is powered by a Qualcomm Snapdragon 450 octa-core processor with 2GB/3GB RAM options and up to 32GB of storage.

The phone comes with a dual-camera setup at the rear panel with a combination of 13-megapixel primary sensor and 2-megapixel secondary sensor. For the front, there is a 5-megapixel shooter for selfies and video calling. It’s backed by a 4230mAh battery and it runs on Android 8.1 Oreo but has received the ColorOS 5.2 update.

It remains to be seen whether Realme will still keep selling its older 2GB + 16GB variant and if yes, will it bring down the price of the same. Realme is currently selling the older version for a price of Rs 7,499, which is the same as that of the latest 2GB + 32GB version.

The 2GB+32GB and 3GB+32GB versions of the Realme C1 will be available in Navy Blue and Mirror Black colours for asking prices of Rs 7,499 and Rs 8,499 respectively on Flipkart.