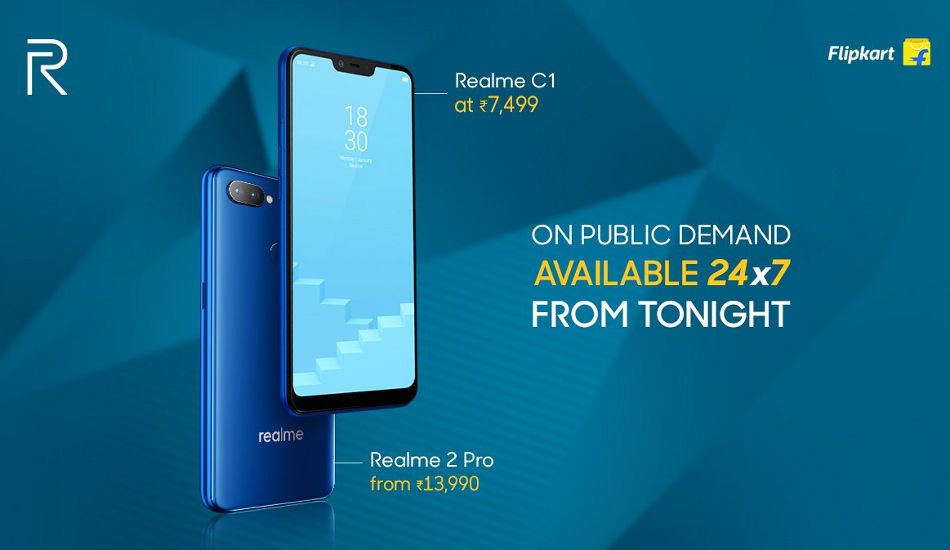 The news comes from changelogs released officially by Realme in its forum, the first of which was posted for the Realme 1 device. The update shifts the build number of the device to CPH1861EX_11.A.27 and features the latest December 2018 batch of Android Security updates from Google.

After confirming Android Pie updates to all its phones before the second quarter of 2019, Realme has now started rolling out the ColorOS 5.2 update to four of its smartphones. The devices set to receive the latest software update are the Realme C1, Realme 2, Realme 2 Pro and Realme 1, all of which will now be loaded with one swipe dismiss for notifications, a headset icon in the status bar, new desktop icons and a smart bar for seamless multitasking.

The news comes from changelogs released officially by Realme in its forum, the first of which was posted for the Realme 1 device. The update shifts the build number of the device to CPH1861EX_11.A.27 and features the latest December 2018 batch of Android Security updates from Google. Additionally, the update improves beauty mode and vivid mode inside the camera and also adds a user-centric watermark for the pictures clicked through the official camera app.

The Realme 2 Pro is also receiving the ColorOS 5.2 Stable OTA update with a build number RMX1801EX_11.A.13 and the latest Android Security Patch dated December 5, 2018. The update on the Realme 2 Pro brings a new Screen Battery Optimization mode which dynamically adjusts the screen contrast and brightness for balanced image quality with lower power consumption. Users can choose between a balance mode and Strong Mode which will affect the battery endurance by up to 10 percent across different use cases.

ColorOS 5.2 on the Realme 2 Pro also adds a new reboot function which can be used by swiping up to reboot in the shutdown interface. The update brings new Material Design icons in the UI and also adds a Slow Motion mode when recording videos through the camera.

Realme is also seeding the latest ColorOS 5.2 for the Realme C1 and Realme 2 smartphones. The update shifts the device build number to RMX1805EX_11.A.21 and brings the latest December 2018 batch of Android Security updates from Google. Among the new features added to the interface, Realme has brought in UI improvements as well as an improved frequency for the touchscreen. The update adds single swipe dismiss for notifications, a new Headset icon in status bar, a Smart Bar for faster multitasking and a swipe up to reboot function in the shutdown interface. ColorOS 5.2 also adds the ability to trigger the Google Assistant on the Realme C1 and Realme 2 by long-pressing the power button for 0.5s.

The stable OTA update of ColorOS 5.2 has already started rolling out for the Realme C1, Realme 2, Realme 2 Pro and Realme 1 and will be seeded in a phased manner. The OTA will be randomly pushed out to a limited number of users in the next few days and will be completed within the first weeks of January. Users who wish to not wait for the update to get to their device can download OTA packages from the Source links below.