Realme 1 Silver Limited Edition launched, to go on sale on June 18 on Amazon 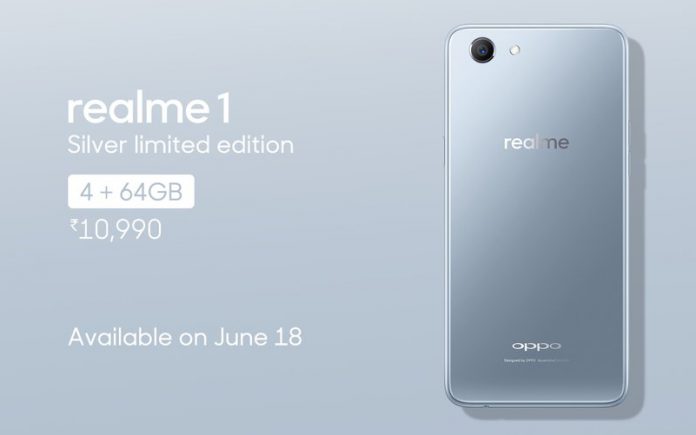 The new Realme 1 Silver Limited Edition has been revealed via the official Realme Twitter account. The tweet reads that this Silver Limited Edition model will be available for purchase on June 18. The smartphone was initially announced in Diamond Black and Solar Red colour options. Like other two variants, the new variant will also be an Amazon exclusive.

Recently, the company confirmed that the Realme 1 will get the latest Android P update. The update for Realme 1 was teased by the company on its social media platforms like Twitter and Facebook.

The Realme 1 smartphone features 6.0-inch Full HD+ IPS LCD display with a screen resolution of 2160 x 1080 pixels and an 84.75 percent screen-to-body ratio. The smartphone is powered by 2.0GHz octa-core MediaTek MT6771 processor, which is none other than Helio P60. The phone features a 4GB of RAM and 64GB of internal storage, which can be further expanded up to 128GB via micro SD card slot.

The smartphone comes loaded with a 13-megapixel rear camera with PDAF and bokeh effect. For the front, there will be an 8-megapixel shooter for selfies and video calling along with portrait mode. The front camera features AI and machine learning. The smartphone is backed by a 3410mAh battery and runs on Android 8.1 Oreo with ColorOS 5.0 running on top of it. AI-backed battery management system to prevent excessive drain.

You can read Realme 1 Review here which is said to be “The son of Oppo at an attractive price”.