New chipsets for smartwatches have been unveiled by Qualcomm. 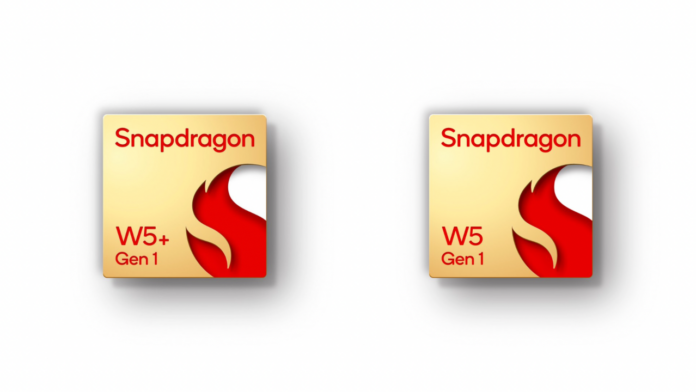 Qualcomm has unveiled the latest generation of its processors for wearables including the Snapdragon W5+ Gen 1 and Snapdragon W5 Gen 1. The new Snapdragon wearable platforms are based on a hybrid architecture and are based on a 4nm node. They employ a 22nm highly integrated always-on co-processor as well.

Further, it incorporates a series of platform innovations including new power Bluetooth 5.3 architecture, low power islands for Wi-Fi, GNSS, and Audio, and low power states such as Deep Sleep and Hibernate. Snapdragon W5+ incorporates a quad core A53 SoC and the next gen M55 Co-processor. It further comes with dual GPUs, a new ML core, and upgraded memory, camera, and audio/video subsystems.

Read More: How to set Google Assistant as default Assistant on Galaxy Watch4?

Oppo and Mobivoi will be the first companies to announce new smartwatches that will be based on the W5+ Gen 1 and W5 Gen 1 platforms. The Oppo Watch 3 series, expected in August, should be the first model to launch while Mobvoi’s next-gen TicWatch flagship smartwatch will launch later this year. According to Pankaj Kedia, Global Business Head, Smart Wearables at Qualcomm, 25 models across product segments are currently in the pipeline.

As for other news related to smartwatches, Samsung also seems to be gearing up to launch the new Galaxy Watch 5 series in August alongside the new foldables. Further, it is unclear whether the watches will employ Samsung’s own Exynos chipset or the company would opt for Qualcomm’s new W5 series processors.