Google employees were clicking the Android 4.4 KitKat Statue using their phones and inadvertently the LG Nexus 5 was also spotted in the crowd.

Google announced the next Android 4.4 version update dubbed as KitKat. This surprising announcement also brought along the ritual of erecting the version name statue in the compound of Google Headquarters. Google’s YouTube Channel had uploaded the video of Android 4.4 KitKat statue unveiling and the upcoming Nexus 5 smartphone was spotted amongst the crowd recording videos, taking photos. Google noticed that and immediately made the video private.

Google Android’s next version KitKat did manage to surprise several folks. In the KitKat statue unveiling video, one of the frames captures a person holding a smartphone with Nexus stamped at the back. Interesting bit is that person is standing next to someone using Nexus 4. Apparently, the person holding an unknown Nexus device was not aware of that. 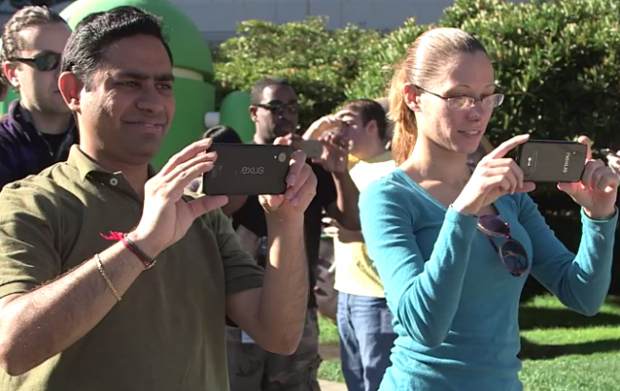 The unknown Nexus device has the Nexus branding at the back consistent with that on the new Nexus 7 (2013) tablet. Also the purported Nexus 5 smartphone also carries the LG branding at the bottom so that confirms all reports about LG working on Nexus 5. The smartphone has a large camera sensor at the back with lens covering it. Just below that is an LED Flash. The Nexus 5 will have close resemblance with the recently announced LG G2 smartphone in terms of features.

The size of the phone appears slightly bigger than the Nexus 4 which measures 133.9 mm tall. Since the video has been taken down, it in a way the arrival of Nexus 5 with Android 4.4 KitKat is obviously on the charts.