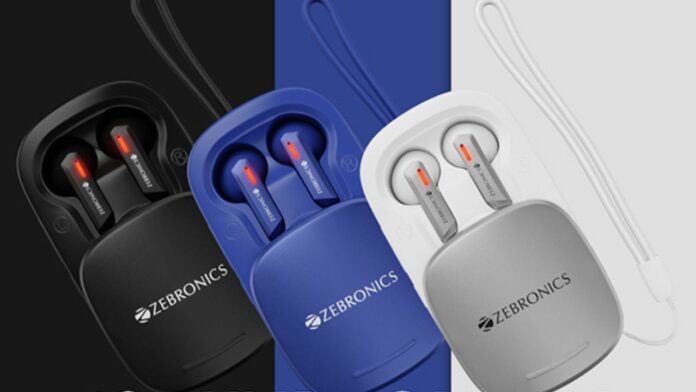 PTron and Zebronics have launched new audio products in India, including the Tangent Sports neckband and ZEB-Sound Bomb X1, respectively. The latter is a 3-in-1 gadget that has Wireless Bluetooth Earbuds packed in a charging case that has a wireless bluetooth speaker and an in-built torch.

Available in 4 colours – Midnight Black, Teal Green, Lightning Blue & Razing Red the earphones are priced at Rs 799. The Tangent Sports will be available on Amazon India from 27th November at a special launch price of Rs 599 for a limited period.

A 10 minute charge can get you up to 7 hours of playtime. It has a total playtime of 60 hours. The neckband comes with a USB C charging port and is IPX4 splash-proof. The magnetic earbuds keeps it secure on your neck when not in use.

The in-built mic and multi-control button assist in changing the volume, playing music, and accepting or rejecting calls. The neckband has Bluetooth v5.2 technology, 10mm speaker size, along with a manufacturing warranty of 1 year.

ZEB-Sound Bomb X1 has been launched in 3 colours– Black, Blue and White. It is available on Amazon with an introductory price of Rs 1,399.

The ZEB-Sound Bomb X1 from Zebronics has 13mm drivers and have a playback time of up to 30 hours with its charging case. The wireless bluetooth speaker built in the charging case comes with upto 19 hours of playback time. The ear buds have touch controls, inbuilt mic, and are splash proof.