For around the same price, the Oppo Reno 10x Zoom competes with the latest OnePlus 7 Pro, both of which feature top-of-the-line specs with no bezels and chins and triple cameras for primary imaging. But which one out of the two would you choose as your flagship killer?

Oppo has just unveiled the Reno 10x Zoom smartphone under a new Reno branding in India. The smartphone comes with a price tag of Rs 49,999 and it will be available for purchase from Flipkart, Amazon and key retail stores.

For around the same price, the Oppo Reno 10x Zoom competes with the latest OnePlus 7 Pro, both of which feature top-of-the-line specs with no bezels and chins and triple cameras for primary imaging. But which one out of the two would you choose as your flagship killer? Let’s talk about that.

The Oppo Reno 10x Zoom comes with a textured back panel which has a matte finish to minimise smudges through fingerprints. While there’s a Corning Gorilla Glass 6 on the front, it’s unknown whether the protection extends to the back of the phone, though the glass back does give a premium feel to the Oppo device. The Ocean Green colour that we received as our review unit has a frosted finish and the phone is held together inside an aluminium frame and glimmers at different angles. Oppo has also added a green pimple which isn’t just a design option but also protects the cameras at the back from getting damaged. 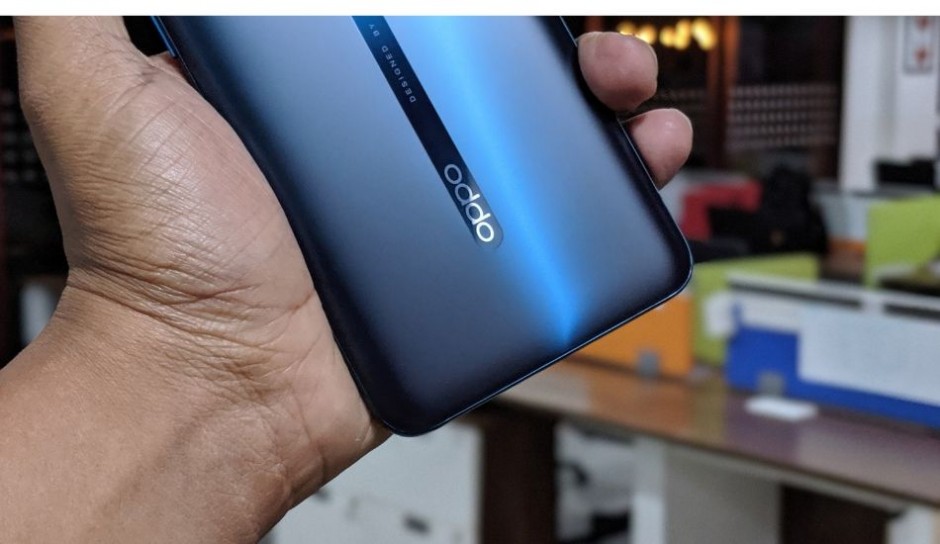 The OnePlus 7 Pro will succeed on the design language of the OnePlus 6T and will feature a glass body with a gradient pattern at the back. While OnePlus has released a bunch of colour variants of its smartphones, this time, the OnePlus 7 Pro will come in Mirror Grey, Almond and Nebula Blue. The colours look nothing like any other smartphone’s back panel and pose as eye candies. The glass design also speaks of the premium nature of the device.

The OnePlus 7 Pro comes loaded with a fullscreen display that is curved and devoid of any notch or hole-punch nonsense. The phone features a 6.67-inch Fluid AMOLED display with 1440x3120 pixels resolution, 516ppi pixel density, and 90Hz maximum refresh rate. To help with the full-screen experience, OnePlus has employed a motorised pop-up at the top of the phone and a thinner chin at the bottom. This means users get an extended screen to make use of, one which has a screen-to-body ratio of 88.0 percent. 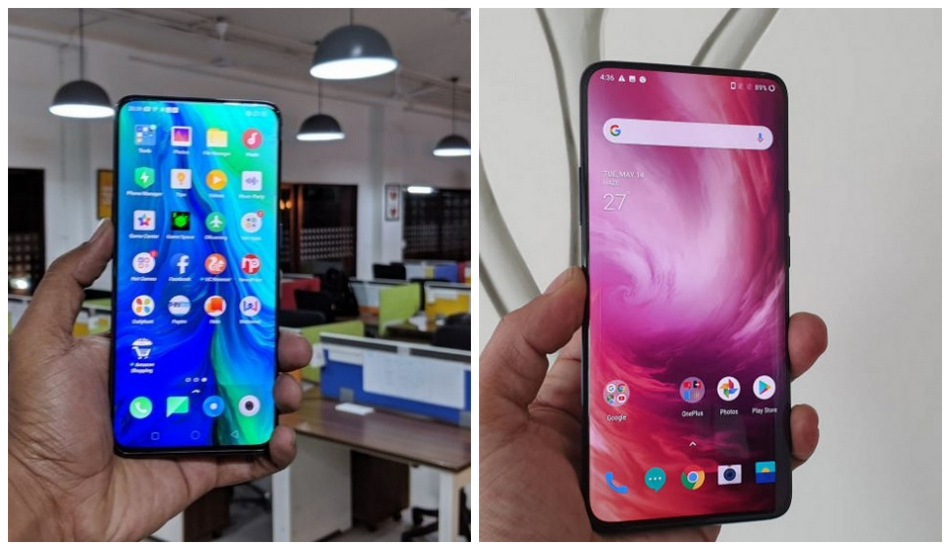 The screen on the Reno 10x Zoom features a 6.6-inch Full HD+ AMOLED panel with a resolution of 2340 x 1080 pixels and an aspect ratio of 19.5:9. Thanks to the Shark Fin Rising Camera, the screen is devoid of any cutouts or punch holes, thus maintaining a screen-to-body ratio of 86.8 percent, which is still lesser than the screen real estate on the OnePlus phone. The screen also features Blue light reduction, which means that it emits less blue light as it is certified with TUV Rheinland, an eye-care certification.

Let’s get over one plain detail. Both the Oppo Reno 10x Zoom and OnePlus 7 Pro are powered by the same Qualcomm Snapdragon 855 processor with Adreno 640 GPU. While the storage options extend to up to 256 GB on both phones, the OnePlus device can be purchased with up to 12GB of RAM whereas the Oppo phone maxes out at 8GB.

There are only minor differences between the phones in the hardware department. The OnePlus 7 Pro uses 2-lane UFS 3.0 storage and LPDDR4X RAM technology which are relatively new. The Reno 10X Zoom has its own merits as well with the Copper Pipe Cooling, haptic feedback and graphite sheets. Both phones also feature in-display fingerprint sensors and there isn’t much to nitpick from the two phones.

The Oppo Reno 10x Zoom is equipped with a triple-camera setup - a 48MP primary sensor (f/1.7, 26mm wide, 1/2.0", 0.8µm, Laser/PDAF, OIS), a 13MP periscope telephoto lens (130mm, f/3.0) with 5x Zoom and an 8MP ultra-wide angle lens (f/2.2, 16mm). The phone utilises all the three cameras to offer a 10x hybrid zoom which in perspective can be summed up as ultra-wide - primary - zoom = 10x. There are different modes including Ultra-Night Mode 2.0, Dazzle Color Mode, Artistic Portrait mode and the phone will be able to shoot 4K videos at 60fps. The device has a 16MP motorised Shark Fin Rising Camera for selfies and video calling. There is optical image stabilisation on two of the three cameras at the back. 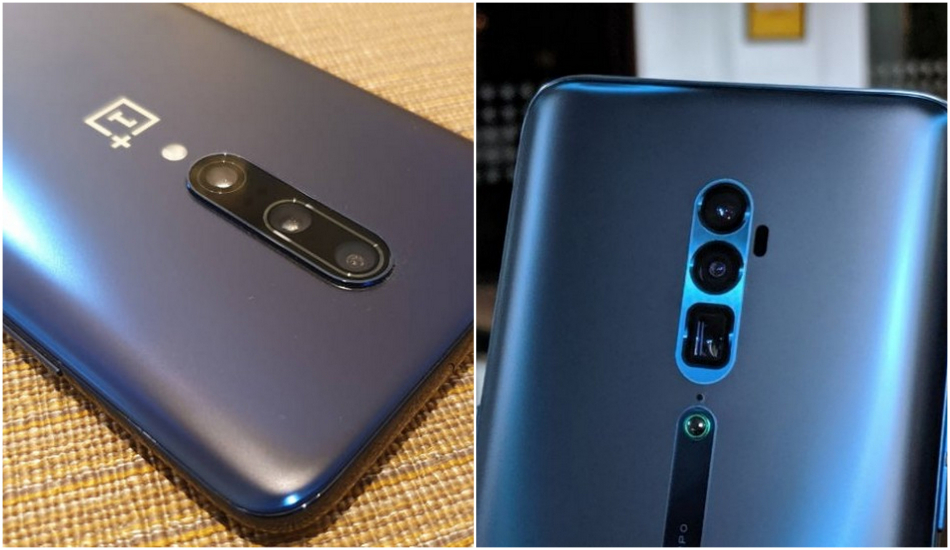 The OnePlus 7 Pro, on the other hand, is equipped with a triple rear camera set up at the back, with one 48MP sensor with f/1.6 aperture, and OIS, 16MP wide-angle secondary sensor with f/2.2 aperture and 117 degree field of view, and a third 8MP sensor with f/2.4 aperture, 78mm focal length, and a 3x optical zoom. The phone will have Phase Detection Autofocus, Laser Autofocus, Continuous Autofocus, and a dual LED flash. For the front, the phone has a 16MP Sony IMX471 pop-up camera with f/2.0 aperture, Electronic Image Stabilisation (EIS), and 1080p video recording support at 30fps.

While there isn’t much to compare between the two phones’ cameras, the one on the Reno edges past the 7 Pro since it offers more flexibility through its extended zooming capabilities.

While the software does scream of stock Android, OnePlus 7 Pro certainly runs on the company's skin on top of Android, though we’d say it’ll be the lightest one around. Users can theme around with OxygenOS with different accent colours and there’s a new navigation system which doesn’t use a bar on the bottom but instead let you swipe from any side of the screen. Both features are now in the process to be added to Google’s own upcoming OS - Android Q and OnePlus already have it. 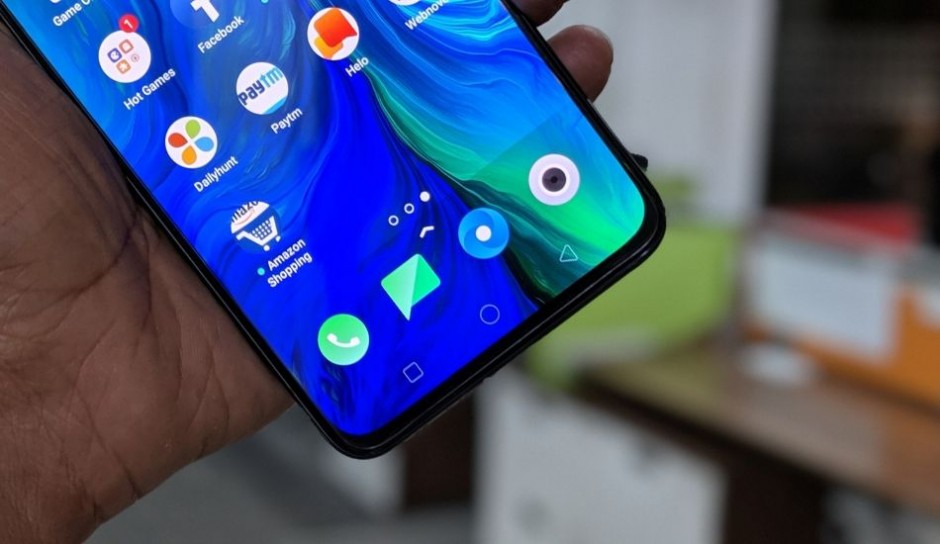 On the software front, the Oppo Reno 10x Zoom runs on ColorOS 6.0, which is based on Android 9.0 Pie. The company has improved its user interface and it has finally included the app drawer support, which is a good thing. The user interface is smooth in operations and we didn’t face any lag during our brief testing. But it’s still ColorOS which has its own set of demerits and Oppo isn’t exactly known for seeding the latest updates to their phones.

The Oppo Reno 10x Zoom is backed by a 4065mAh battery and the company has added VOOC 3.0 fast charging solution which charges the phone at 20 watts. The OnePlus 7 Pro offers a relatively equal 4000mAh power unit but it comes with a much faster 30-watt Warp Charge technology.

For long, the mid-range phones stayed stagnant when it came to the design language but the Oppo Reno 10x Zoom is clearly a step up in the right direction. For all its attractive goodness, the Reno doesn’t miss out on other features that are found in flagship phones either as it’s powered by the latest Snapdragon 855 chip, has three cameras with a periscopic 10x zoom lens and an all-screen display with no bezels. It’s only questionable traits are the ColorOS 6 which isn’t known for an easy UX and a 20W charger which has become a standard in the recent years. If that is what majorly bothers you, then you might get your hands on the OnePlus 7 Pro which offers almost all the goodies of the Reno 10x Zoom with clean stock Android and 30-watt Warp Charging.

OnePlus 7 Pro vs Google Pixel 3a XL: Bridging the gap between flagship killers and premium phones