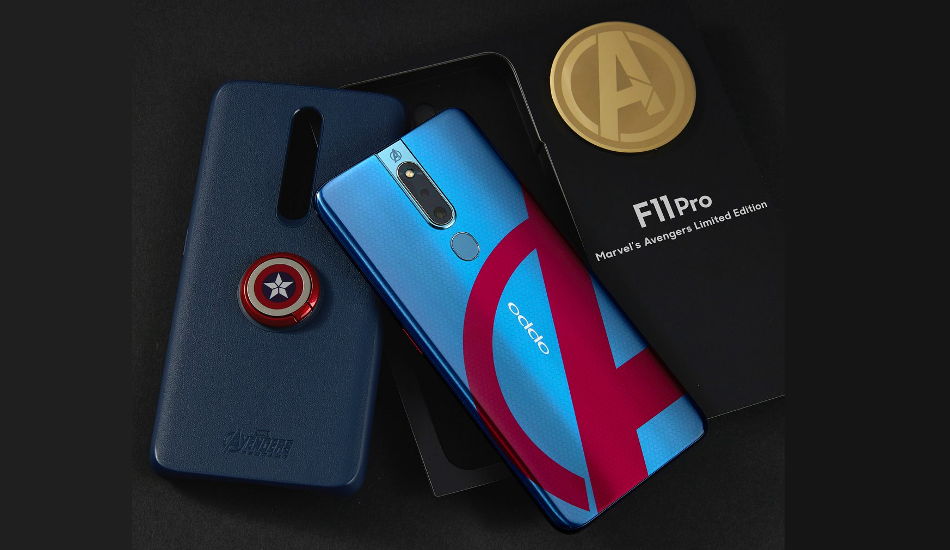 The Oppo F11 Pro Marvel Avengers Limited Edition comes with 6GB of RAM and 128GB internal storage instead of 64GB storage in the standard variant.

As promised, Oppo has today launched a limited Avengers edition of the OPPO F11 Pro in India for Rs 27,990. The new limited edition smartphone has been announced in partnership with Marvel.

The smartphone will be exclusively available on Amazon India and its pre-orders begin from April 26. The Oppo F11 Pro Marvel’s Avengers Limited Edition will also be made available via offline channels starting from May 4, 2019.

Oppo F11 Pro Marvel Avengers Limited Edition comes in Blue and Red colours along with the red Avengers logo at the back panel. The edition comes with a protective case which has been influenced by Captain America’s iconic shield. The shield can be used as a phone stand holder.

The Oppo F11 Pro Marvel Avengers Limited Edition comes with 6GB of RAM and 128GB internal storage instead of 64GB storage in the standard variant. Apart from this change, the rest of the specifications remain the same. The standard F11 Pro was launched in India in March for Rs 24,990.

The Oppo F11 Pro new edition is backed by a 4000mAh battery along with VOOC 3.0 fast charging. It is powered by an octa-core MediaTek Helio P70 processor along with Mali-G72 MP3 GPU The phone runs on ColorOS 6.0, which is based on Android 9.0 Pie. The phone is backed by a 6GB of RAM and 128GB of internal storage, which can be further expanded via microSD card slot. It also features a fingerprint sensor and face unlock.