Oppo A5s smartphone to launch in India next week 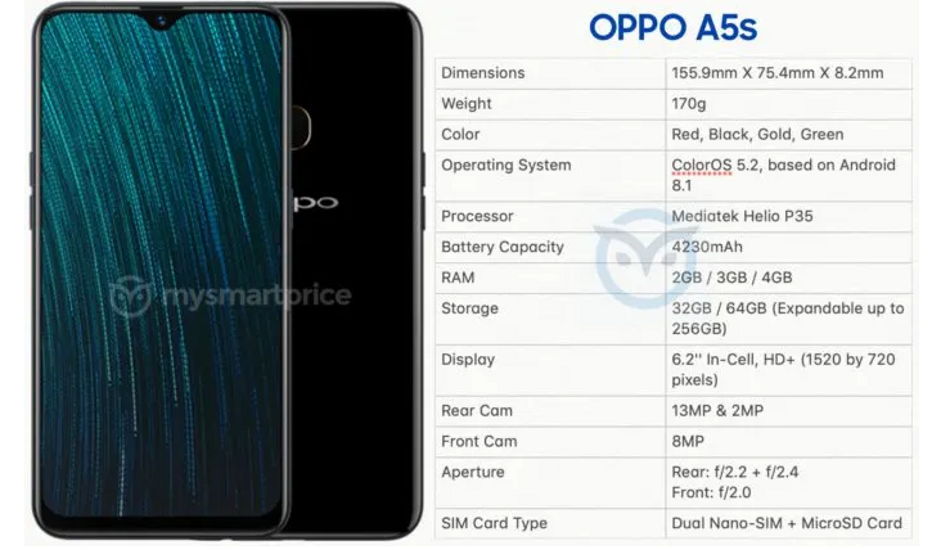 The Oppo A5s will sport a waterdrop-shaped display notch, and will house a 4,230mAh battery.

Chinese smartphone maker Oppo will launching a new smartphone under A series in India in the highly competitive Rs 10,000-price segment. The upcoming smartphone, called A5s, will arrive next week in the country, industry sources told IANS on Tuesday.

The Oppo A5s will sport a waterdrop-shaped display notch, and will house a 4,230mAh battery, IANS added. Meanwhile, Oppo India website has also listed the smartphone on its website confirming its imminent launch in the country. On the website, the Oppo A5s is listed in Red, Black, Gold, and Green colour options.

To recall, the Oppo A5s was recently unveiled in Taiwan. The phone features a 6.2-inch In-cell display with 720 x 1520 HD+ resolution, 19:9 aspect ratio, and a waterdrop notch at the top. It is powered by MediaTek’s 12nm Helio P35 octa-core processor. The smartphone will be available in 2GB / 3GB and 4GB RAM options along with 32GB and 64GB of onboard storage which can be extended further up to 256GB via microSD card slot.

For the imaging department, the phone features a horizontally arranged dual rear camera setup of 13-megapixel + 2-megapixel sensors. It has an 8-megapixel front camerawith an f/2.0 aperture for selfies. The primary 13MP sensor will be paired with an f/2.2 aperture, while the front-facing 8MP sensor will have f/2.0 aperture. The phone features a fingerprint sensor and face unlock as well.