OnePlus Nord CE 5G to launch in India on June 10

OnePlus has announced the India launch of the next Nord phone in the lineup which is called OnePlus Nord CE 5G. As per OnePlus, the ‘CE’ stands for Core Edition. The Nord CE 5G will launch in India and Europe on June 10 at the Summer Launch Event at 7:00 pm IST.

The OnePlus Nord CE 5G isn’t believed to be the successor to the original OnePlus Nord, but to the OnePlus Nord N10 5G that was launched last year in Europe but never made its way to India. This is very likely considering the OnePlus Nord 2 moniker was spotted on the official website for a brief period.

The company says the OnePlus Nord CE 5G will be “focused on delivering the core excellent features needed in a device while also bringing the signature Nord experience to users”. Amazon availability for the device has also been confirmed in India. OnePlus also confirmed that the Nord CE will be available for pre-order for the Red Cable Club members on June 11 and on June 16, the phone will be available for everyone to purchase.

In a recent leak by tipster Yogesh on Twitter, the price for the OnePlus Nord CE 5G is said to be Rs 2000 cheaper than the price of the original Nord in India, which started at Rs 24,999. 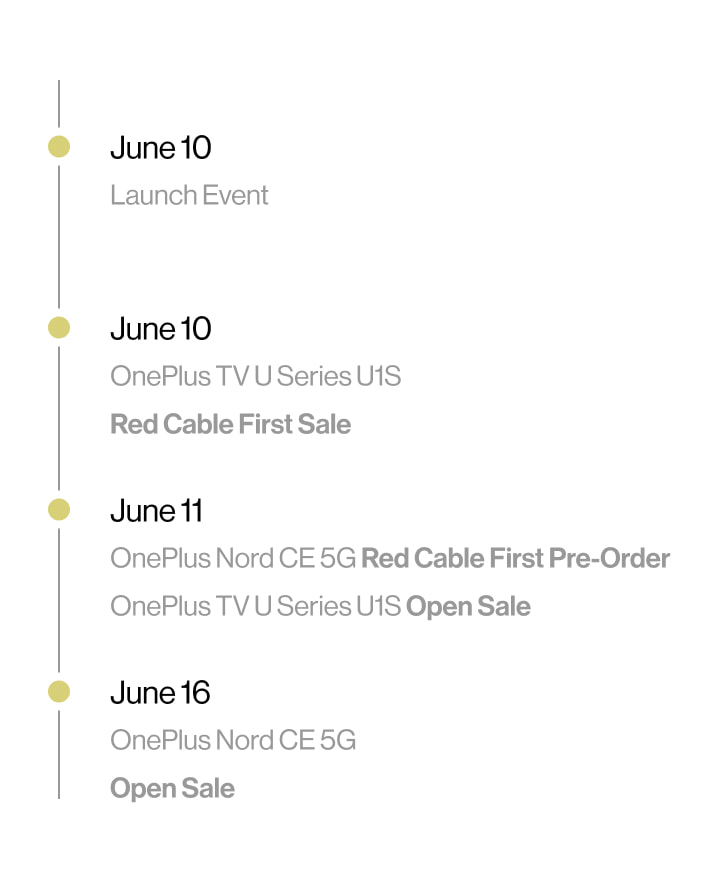 The company will also expand its TV U series alongside the launch of the OnePlus Nord CE 5G. The TVs are expected to come in three sizes including 50-inch, 55-inch, and 65-inch along with features such as HDR10+, HLG, and MEMC support. The TVs will go on pre-order for Red Cable members on June 10 while they will go on open sale starting June 11.

Pete Lau has also confirmed the launch of the OnePlus Nord N200 5G through a forum post. This phone will act as a successor to the Nord N100 5G that was launched in 2020. Same as the case last year, the Nord N200 5G won’t come to India and will be a US and Canada exclusive smartphone. There’s no release date for the Nord N200 5G as of now.