OnePlus 6 is no doubt turning out to be an anticipating flagship smartphone for the year 2018. The phone has been subjected to various leaks in the past regarding the specifications of this upcoming OnePlus flagship. Now the smartphone has also received WiFi certification from the WiFi Alliance (WFA).

As per the Wi-Fi certification via popular leakster Roland Quandt, the OnePlus 6 carries model number ONEPLUS A6003 and it will support dual-band Wi-Fi a/b/g/n (2.4GHz, 5GHz)and LTE capabilities. Sadly, the listing does not show any specifications except that the device will be powered by Android 8.1.0 Oreo operating system. The listing carries the certification ID WFA74031 and the date of certification being 2nd March 2018. 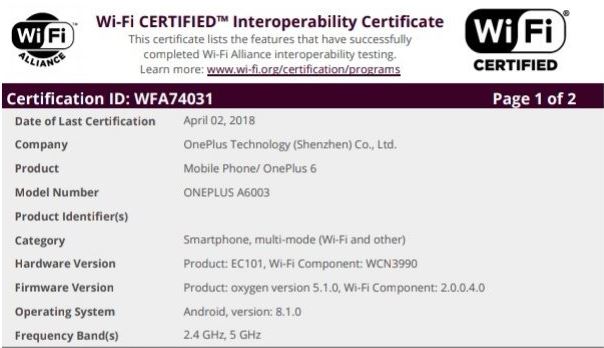 Recently, OnePlus confirmed that it will bring the top-notch similar to Apple iPhone X in its next flagship device. The brand’s co-founder Carl Pei confirmed that the upcoming smartphone will join the league of other Android smartphone makers that are going to launch their devices with a top notch.

As per the earlier leaked specs, OnePlus 6 with model number A6000 will feature a 6.28-inch Full-HD+ AMOLED display with screen resolution of 2280 x 1080 pixels and an aspect ratio of 18:9. It will be powered by 2.7GHz octa-core Qualcomm Snapdragon 845 processor. OnePlus 6 will have 6GB RAM with 128GB internal storage.

OnePlus 6 will be running on Android 8.1 Oreo operating system most likely with Oxygen OS on top (or Hydrogen OS for China-only devices). The phone will be backed by a 3,450mAh battery which is expected to boast Dash Charge technology. The device will be 7.5mm thin and will weigh 175 grams.