OnePlus will host pop-up events of the OnePlus 5 across India from June 23rd to June June 25th.

OnePlus has already announced that its next-generation flagship device, the OnePlus 5 will be launched in India on June 22. Soon after the announcement, Amazon India revealed that the upcoming smartphone will be exclusively available for purchase from the website on the same day. Now OnePlus has confirmed that it will host pop-up events of the OnePlus 5 across India from June 23rd to June June 25th.

As per OnePlus, these pop-up events will be held in India in four cities – Chennai, New Delhi, Hyderabad, and Bengaluru. OnePlus India website has listed the details of the pop-up event venues in these cities. 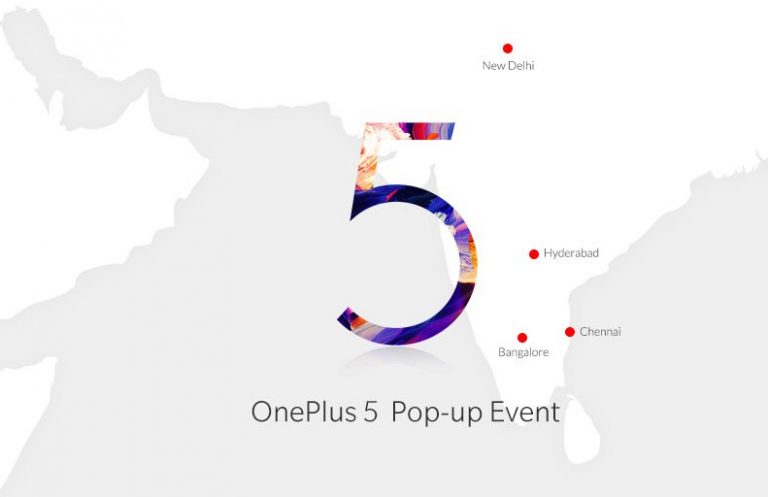 Recollecting some previous rumours, the device is reported to be powered by the latest Qualcomm Snapdragon 835 processor along with Adreno 540 GPU. It will feature a Full HD display with a screen resolution of 1080 x 1920 pixels, which contradicts previous rumours predicting a Quad HD display for the upcoming flagship device. The screen size will be of 5.5-inch.

The phone is reported to run on the latest Android 7.1.2 Nougat and will come with a bigger 3600 mAh battery (Evan Blass leaked a 4000 mAh non-removable battery). Interestingly, similar to what we saw on OnePlus 3 and 3T, OnePlus is likely to go with a front-facing fingerprint scanner at the front. OnePlus is also expected to introduce the new Dash Charge 2.0.