Where is the Volume Rocker ?

OnePlus has once again landed up in a new controversy and this time it is about a faulty unit of the latest flagship smartphone, the OnePlus 5. A customer in India reportedly received a faulty unit of the OnePlus 5, which had no volume controls.
A Twitter user known as Kapil Tandon posted an image of the device on the social media site with a caption that reads, “Guys this is what assembling in India does? The just delivered #OnePlus5 Volume button/switch missing!!” The image shows that the left side of the device does not have any volume rocker button. Till now there is no confirmation about whether the OnePlus 5 shown in the photo is purchased in the early access sale on Amazon or from one of the pop store events running throughout the country. 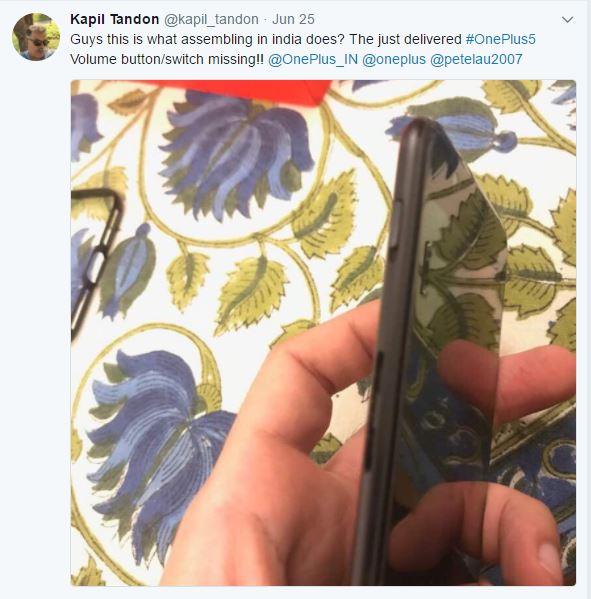 However, this is not the first time OnePlus has been marred by controversies. The brand has been already accused of manipulating benchmarks results with the latest flagship device. As per a report by XDA Developers, “Every single review of the OnePlus 5 that contains a benchmark is using misleading results, as OnePlus provided reviewers with a device that cheats on benchmarks.” Further, they have also claimed that this time the cheating mechanism is “blatant and aimed at maximising the device’s performance.”
OnePlus is also accused of copying Apple iPhone 7 Plus design as well. Many were shocked by the fact that the device is eerily similar to the Apple iPhone 7 Plus. When you place both the device side-by-side, one cannot simply distinguish between the devices. You get the same antenna bands placement, which is found in the latest iPhones. Even the dual-camera setup is situated at exactly the same place as we have seen in the Apple iPhone 7 Plus and even the working of the dual-camera setup is similar to what we have seen in the latest iPhones.
Talking about camera, multiple international reviews declared that though OnePlus 5 meets most expectations as you would expect with a phone with such high hardware specs, surprisingly, disappoints with its camera.