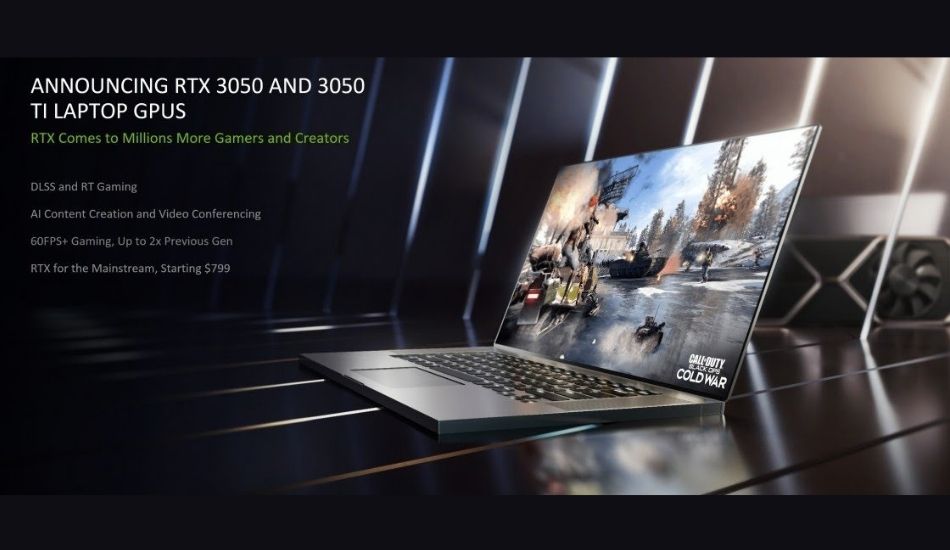 Nvidia has launched the RTX 3050 and RTX 3050 Ti gaming GPUs for entry-level level, as well as slim and light laptops that will now be able to use high-end features such as DLSS, Ray-Tracing and more

Nvidia has now released the new set of GeForce RTX 30 series GPUs for an entirely new segment of gaming laptops. The new discrete GPUs include GeForce RTX 3050 and GeForce RTX 3050 Ti. These new GPUs are aimed at entry-level as well as slim and light laptops.

The new GPUs are based on the same Ampere architecture which is leveraged by the rest of the desktop and mobile GeForce RTX 30 series GPUs. The GeForce RTX 30 series will replace the GTX 16-series and we will see it equipped on multiple brands including Alienware, Razer, Lenovo, MSI, Dell, Asus, Acer, HP, and Gigabyte along with other smaller brands.

The TDP range will be configurable by brands on the basis of their respective models and will range between 35W and 80W that will in turn also affect the operating frequency range. The GPUs feature boost clock speed ranges of 1035 – 1695MHz and 1,057 – 1,740MHz respectively. Both the GPUs have 4GB of GDDR6 RAM upon a 128-bit bus.

Both the GPU cards feature real-time ray tracing as well as NVIDA’s Deep Learning Super-Sampling (DLSS) which makes use of AI cores to run demanding games. Nvidia bringing the DLSS in this price segment is calling it a game changer.

Nvidia claims the new RTX GPU equipped laptops will be able to offer a 4 times boost in games and nearly 2.5 times better performance in video editing compared to last-gen graphics cards. Both new RTX models can go beyond 60fps with ray tracing enabled in titles like Call of Duty: Warzone, Watch Dogs: Legion, and Control.

The eSports Gamers are also in for a treat as Nvidia claims the GeForce RTX 3050 Ti is claimed to deliver over 144fps and sub-25ms latency in games such as Overwatch and Valorant. Video editors can work and edit on 8K raw footage whereas the artists can visualise design changes in real-time rather than waiting for long renders, all of which using the DLSS.