Nokia X6 official renders leaked ahead of May 16 launch

The retailer Suning is holding a photo contest with 10 units of Nokia phone as a reward.

HMD Global is expected to launch the Nokia X6 on May 16. Now ahead of the launch, some official press renders of the smartphone have surfced online.

Online retailer Suning, has posted the promotional poster of the upcoming device. The retailer Suning is holding a photo contest with 10 units of Nokia phone as a reward. The poster also revealed the top three entries will get some money as a bonus to their new Nokia X6. 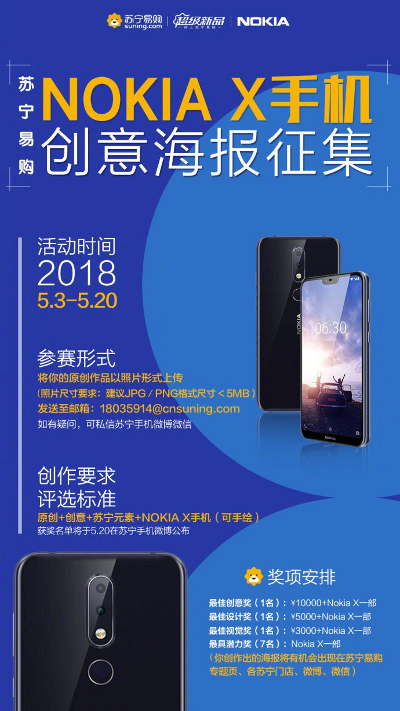 Recently, a hands-on video of the Nokia X6 also leaked online. There is no official word about its specifications. However, if reports are to believed, the phone features a 5.8-inch Full HD+ display with an aspect ratio of 19:9, dual rear cameras with Zeiss lens, fingerprint sensor and Android Oreo operating system. The phone is said to be coming in two versions: one with Snapdragon 636 and 6GB RAM and the other with MediaTek Helio P60 SoC with 4GB RAM.