The smartphone has been spotted on a benchmarking site Geekbench, which reveals some key specifications.

Nokia 8 is reported to be the first non-Google smartphone to run on the soon-to-launch Android O. The smartphone has been spotted on a benchmarking site Geekbench, which reveals that it will come with Android O along with some key specifications.
According to the listing, the smartphone is codenamed as Unknown Heart. The phone has scored 1789 with a single-core test, while in multi-core test the device scored 6494 points. Interestingly, the listing reveals that the phone runs on Android 8.0.0 or Android O. Further, the listing reveals that the device will be powered by the latest 1.90GHz octa-core Qualcomm Snapdragon 835 SoC along with 4GB of RAM. 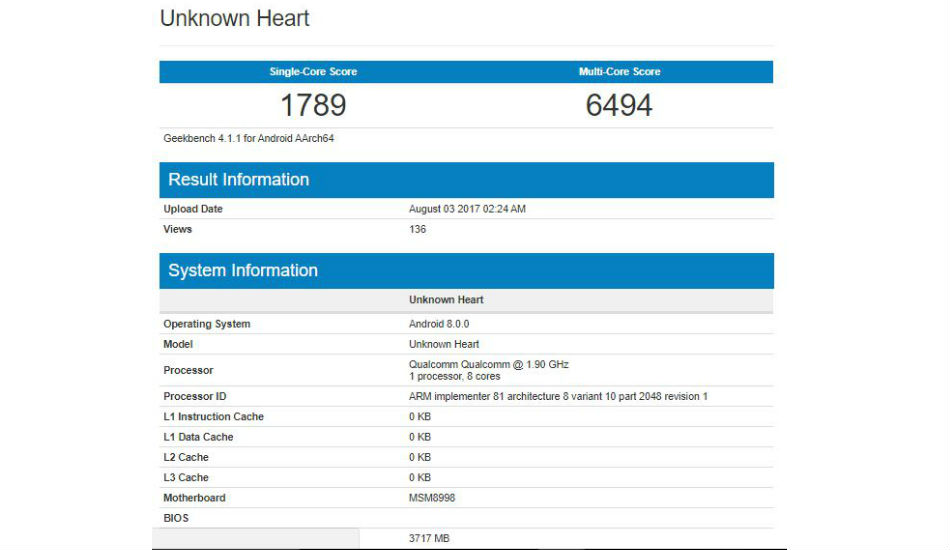 However, the listing does not reveal the screen size, battery, camera and other features. HMD Global is all set to launch the Nokia 8 smartphone on August 16. Previously, the device was found listed on Vodafone Romania website, which revealed the EUR 517.42 price tag of the upcoming smartphone. If the pricing is believed to be true, then HMD Global is planning to compete with OnePlus, which such specs and pricing.
Recollecting some key specifications of Nokia 8, the smartphone bearing model-number TA-1004 is rumoured to feature a 5.3-inch Quad HD display with a resolution of 1440×2560 pixels and will be powered by Qualcomm Snapdragon 835 processor.
You might like this:
It may have a 4GB RAM and 64 GB internal memory which can be further beefed by via microSD support. Also, it is expected that the device will support a dual 13-megapixel camera at rear and an 8-megapixel camera in the front. It is also expected to have a fingerprint scanner.