Nokia 3310 vs Darago 3310: Battle between original and clone

Let's keep these devices head to head and compare them on the basis of specifications.

HMD Global announced the launch of most talked about feature phone ‘Nokia 3310’ last week in India at Rs 3,310 and is now available for purchase through offline stores across India, whereas Darago 3310, so-called clone of Nokia 3310, priced at just Rs 799 and is available for purchase through Flipkart. Darago 3310 is manufactured by Shenzhen Darago Technology Co. Ltd and was established in July of 2012. The company has a base in Shenzhen, China. 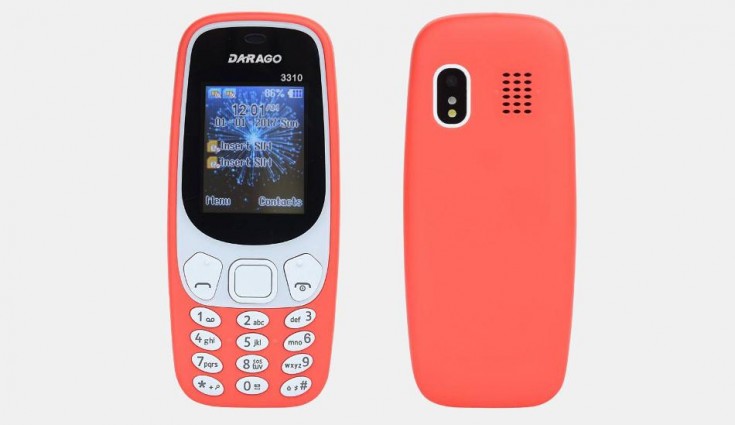 Let’s keep these devices head to head and compare them from specifications point of view.

This Darago 3310 looks almost identical to new avatar of Nokia 3310 in terms of design. The keypad layout and the camera cutouts are also quite similar to Nokia 3310. The only noticeable difference is the placement of the micro-USB charging port, which is placed at the bottom in the clone, while in Nokia 3310 it is placed on the top. The Nokia 3310 measures 115.6 x 51.0 x 12.8mm and weight 79.6 grams (including battery).

On the camera front, Darago 3310 comes with a mediocre 0.3-megapixel (VGA resolution) rear camera with LED flash, while we get a 2-megapixel rear camera with LED flash in Nokia 3310. With this kind of resolution, we can’t expect both phone’s camera to perform outstanding, but Nokia 3310 can provide you with the better image quality than Darago 3310’s VGA resolution camera. Both the feature phones don’t have the front camera.

Now let’s see which smartphone is worth your hard earned money. The two devices have a price difference of almost Rs 2511, where Nokia 3310 is the costlier. But we have to keep this in mind that Nokia still has a strong fan following in India and the band value they possess. HMD Global recently issued a statement to a tech website ‘nokiapoweruser’ that the demand of Nokia 3310 in India has been exceeding expectations and they are overwhelmed by the response. Further, they have assured that they will be bringing in, even more, stocks soon.

And also if we compare the specifications of both the features phone, Nokia 3310 comes out to be a clear winner in all the departments and most likely to provide a much more pleasant experience while operating and it has a reliable Nokia name attached to it.