The nexGTv mobile app is available for Android, Apple, BlackBerry as well as from Nokia's Ovi store.

If you are eagerly waiting for the upcoming Pepsi IPL tournament, then here is a good news for you. Digivive’s nexGTv has announced that it will stream the matches live through its mobile application.

In addition to that , match repeats and highlights will also be available in the Video-on-Demand section of the nexGTv mobile app. 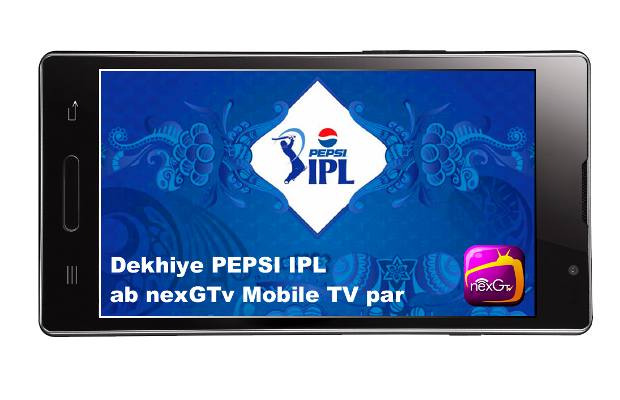 With a total of 76 matches, the action will start on April 03 and go on till May 26. Pepsi IPL channel will be clubbed into existing subscription packs of nexGTv hence users can watch it by subscribing to these packs.

GD Singh, director, DigiVive said, “Cricket is not just a sport in India but the real source of entertainment with lot of emotions involved. This is ‘the real content’ desired by users. We have witnessed immense success during last cricketing actions that were streamed live on nexGTv. Streaming all the 76 matches of IPL is yet another step towards our commitment of delivering best possible service and content on our mobile TV platform.”

The nexGTv mobile app is available for Android, Apple, BlackBerry as well as from Nokia’s Ovi store. Even feature phone users can download the app by sending an SMS (MYTV) to 58888. The app offers channels such as Sony bouquet, Star bouquet, Aaj Tak, Asianet, Raj Channels etc. One of its unique features is adaptive streaming which enables seamless live streaming even on 2G network.