Motorola One Action has 4GB RAM and it is powered by Samsung’s octa-core Exynos 9609 SoC clocked at 1.6GHz processor.

Motorola One Action is still to go official and it has now been spotted on Geekbench benchmarking website. The listing has revealed few specifications of the upcoming phone. 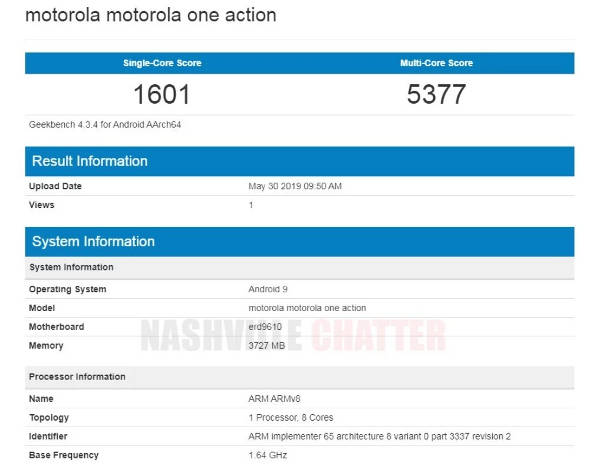 As per the GeekBench listing, Motorola One Action has 4GB RAM and it is powered by Samsung’s octa-core Exynos 9609 SoC clocked at 1.6GHz processor. Apart from the Exynos 9609 chipset, the Geekbench listing also reveals that the smartphone will launch with the Android 9.0 Pie operating system right out of the box. In the listing, Android One smartphone has achieved a single-core score of 1,601 and a multi-core score of 5,377.

Sadly, at the moment, no more specs are known for the Motorola One Action. We will have to wait for the official launch to know more details.

To recall, the Motorola One Vision features 6.3-inch Full HD+ LCD display with 1080×2520 pixels resolution and 21:9 aspect ratio. It is powered by 2.2 GHz Octa-Core Exynos 9609 processor coupled with 4GB RAM, 128GB storage and expandable memory up to 512GB with microSD.