According to the benchmarking website, the smartphone will come with a 5.5-inch Quad HD display with a screen resolution of 2560 x 1440 pixels.

Motorola is gearing up to add another member to its Z series which would be known as Moto Z2. The smartphone has been subjected to various leaks in the past and now it is reportedly spotted on GFX Bench.
According to the benchmarking website, the smartphone will come with a 5.5-inch Quad HD display with a screen resolution of 2560 x 1440 pixels. The listing further reveals that the phone will be powered by the latest octa-core Qualcomm Snapdragon 835 SoC clocked at 2.4GHz along with Adreno 540 GPU. It will be backed by a 4GB of RAM and 64GB of internal storage. 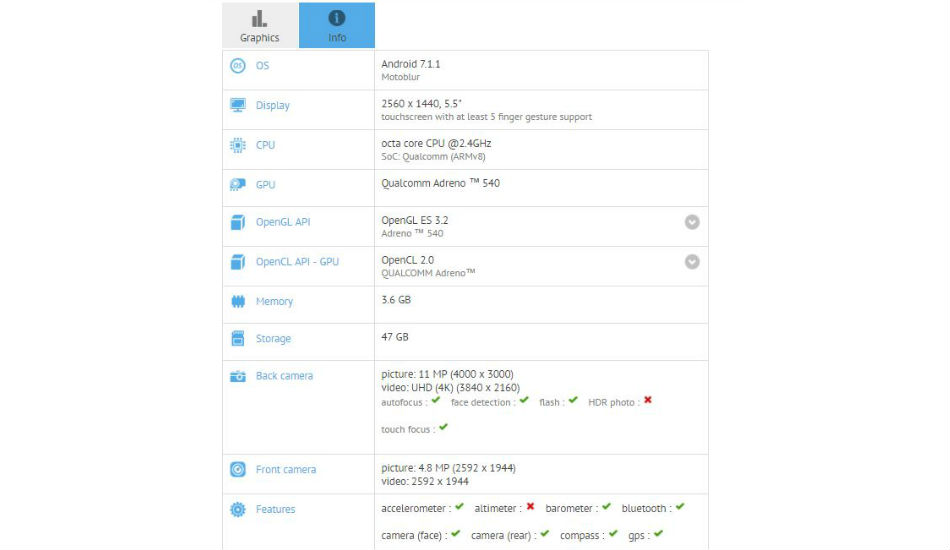 On the camera front, the listing reveals that it will bear a 12-megapixel rear camera with autofocus, face detection and flash. The rear camera will sport 4K recording as well. Interestingly, the smartphone is reported to sport a dual-camera setup at the rear panel. For the front, there will be a 5-megapixel shooter for selfies and video calling.
The smartphone will run on latest Android 7.1.1 Nougat. On the connectivity front, it will support WiFi, GPS, Bluetooth, and NFC as well. Coming to the sensors, Moto Z2 will include Accelerometer, Barometer, Compass, Gyroscope, Light sensor, Pedometer, and Proximity sensor.
The specifications are in line with previous benchmark listing. The phone was earlier spotted on Geekbench, which revealed some keys specifications. As per the listing, the Moto Z2 got 1879 points in single-core test and in muli-core test it received 6503 points.
As per the listing on Geekbench, the Moto Z2 has 4GB RAM and Qualcomm Snapdragon 835 1.90 GHz octa-core processor. The handset is based on the Android 7.1.1 Nougat operating system. The leaked specs seem to be same as of Samsung’s flagship Galaxy S8.