Moto Z2 will come with 4GB of RAM.

Lenovo-owned Motorola is all set to launch Moto Z2 Play in India today. Now ahead of that, Moto Z2 smartphone has been spotted on a GeekBench benchmarking website. The listing has spilled some beans on the expected specifications of the upcoming smartphone. The Moto Z2 will be launched as the successor to the Moto Z smartphone which was launched last year.

In the GeekBench listing, the Moto Z2 got 1879 points in single-core test and in muli-core test it received 6503 points. As per the listing on Geekbench,the Moto Z2 has 4GB RAM and Qualcomm Snapdragon 835 1.90 GHz octa-core processor. The handset is based on the Android 7.1.1 Nougat operating system. The leaked specs seem to be same as of Samsung’s flagship Galaxy S8. 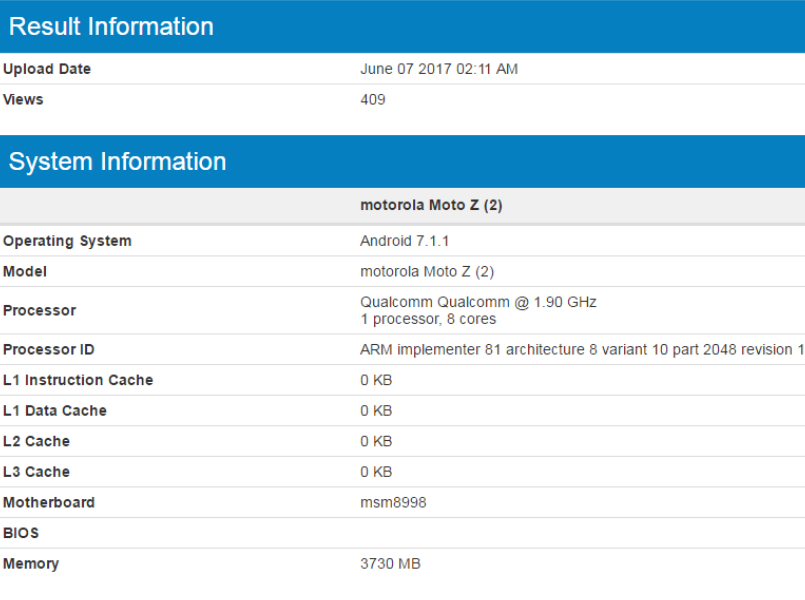 Meanwhile the soon to be launched, Moto Z2 Play comes loaded with a 5.5-inch Full HD Super AMOLED display with a screen resolution of 1920 x 1080 pixels coupled with Corning Gorilla Glass 3 protection and a pixel density of 401 ppi. The device is powered by a Qualcomm Snapdragon 626 processor clocked at 2.2GHz. It comes in two RAM and storage variants: one with 3GB Ram and 32GB storage, while the other one sports a 4GB RAM and 64GB internal storage. The storage can be further expanded up to 2TB via micro SD card slot.

On the camera front, the device features a 12-megapixel rear camera with 1.4-micron pixels, f/1.7 aperture, dual LED flash and laser and dual autofocus lens. For the front, there is a 5-megapixel shooter with f/2.2 aperture, wide-angle lens and a front flash. The device runs on the latest Android 7.1.1 Nougat and is powered by a 3000mAh battery along with TurboPower charger.