The company is planning to first launch the G7 series in Brazilian market way ahead of Mobile World Congress (MWC) 2019.

Motorola is working on its latest Moto G7 series which will includes phones like Moto G7, Moto G7 Plus, Moto G7 Power and Moto G7 Play. Out of them, Moto G7 has now been spotted on GeekBench benchmarking website revealing its key specs.

The company is planning to first launch the G7 series in Brazilian market way ahead of Mobile World Congress (MWC) 2019. While the Moto G7 and G7 Plus are expected to be expensive devices, the G7 Power and G7 Play are said to be affordable devices.

The GeekBench listing, first spotted by Slashleaks shows that the phone scores 1260 in single-core performance and 4759 in multi-core performance. As per the listing, the Moto G7 will be powered by the Snapdragon 660 processor coupled with 3GB RAM. For the software, the phone will run Android 9.0 Pie out of the box. 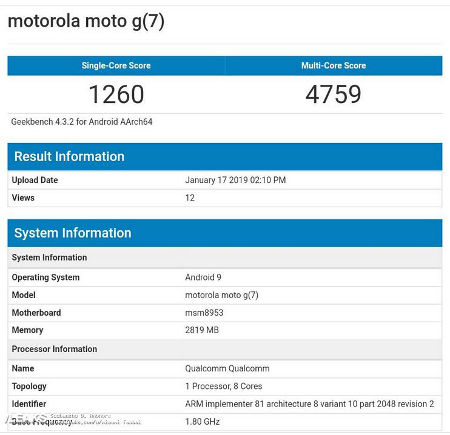 Although the Geekbench listing reveals the Moto G7 comes with 3GB RAM, earlier rumours revealed that the Moto G7 will also come in another variant of 4GB RAM with up to 64GB of internal storage, with an option to expand the storage up to 256GB via microSD card slot. The phone will feature a 6.4-inch Full HD+ display with a screen resolution of 2340 x 1080 pixels.

Moto G7 will be equipped with a dual-camera setup with a combination of 16-megapixel primary lens and a 5-megapixel secondary shooter. For the front, there is a 12-megapixel sensor for selfies and video calling. It will have a 3,500mAh battery and it will run on Android 9.0 Pie.

Earlier, Moto G7 Power was also spotted on benchmarking website, Geekbench. The listing revealed that the smartphone will be powered by a Qualcomm Snapdragon 625 processor and it will be backed by a 4GB of RAM. The phone runs on Android 9.0 Pie and it is expected to feature a 5000mAh battery.