Motorola is gearing up to launch its newest Moto E5 lineup, of which the E5 Plus has been spotted on a GeekBench benchmarking website. The listing has thrown some light on the expected specifications of the upcoming smartphone. Moto E series smartphones include Moto E5, Moto E5 Play and E5 Plus.

In the GeekBench listing via Nashville Chatter Class, the Moto E5 Plus got 653 points in single-core test and in multi-core test it received 1835 points. As per the listing on Geekbench, the Moto E5 Plus has 3GB RAM and Qualcomm MSM8937 1.40 GHz quad-core processor. The handset is based on the Android 8.0.0 Oreo operating system. 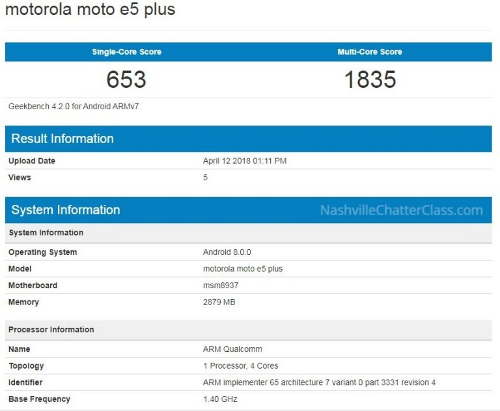 As per earlier renders leaked, Moto E5 Plus will sport 18:9 display. It will feature a 3.5mm audio jack at the top and a USB Type-C port at the bottom. The power button and volume rockers will be placed on the right side. The back panel showed a fingerprint sensor just beneath the dual-camera setup, which is embedded into the Moto batwing logo.

The other two smartphones - Moto E5 (XT1924-3) and E5 Play (XT1944-6) was spotted on Indonesia. The listing reveals that the smartphones could be launched for the Asian market before being rolled out in the European and American markets.

Earlier, two Moto models were found with model No XT1922-4 and XT1922-5 on FCC website which is expected to be Moto E5 and E5 Plus respectively. The listing confirms that the phones will come with 4000 mAh battery.