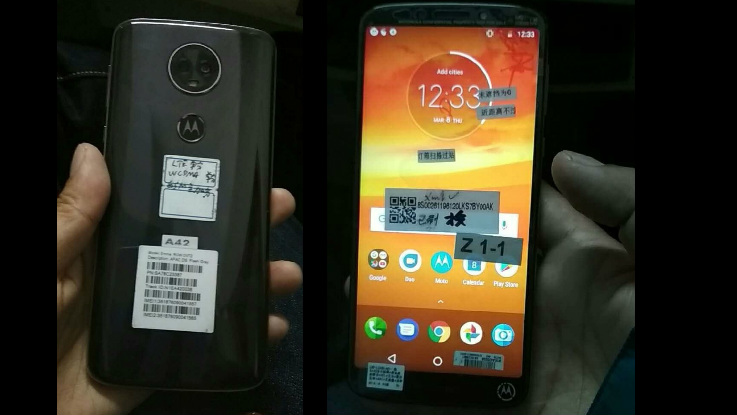 The front panel once again confirms that the smartphone will come with an 18:9 display, which is now becoming a new standard feature in a smartphone.

Motorola is reportedly working on the next-generation of its Moto G, Moto Z and Moto E series. Talking about Moto E-series, we earlier show a press render of the upcoming smartphone and now for the first time, live images of the Moto E5 Plus has emerged online, revealing some design language.

The live images were posted Weibo and it shows the front and back panel of the device. The front panel once again confirms that the smartphone will come with an 18:9 display, which is now becoming a new standard feature in a smartphone. The navigation buttons can be found at the base, while the front houses a front-facing camera along with earpiece and usual array of sensors.

The back panel shows that the smartphone could bear a glossy rear panel, which looks similar to the one seen in Moto X4. Further, the back panel also shows a fingerprint sensor just beneath the dual-camera setup, which is embedded into the Moto batwing logo. The previous render showed, that the smartphone features a 3.5mm audio jack at the top and a USB Type-C port at the bottom. The power button and volume rockers are placed on the right side.

Motorola is reportedly working on three smartphones under its Moto E series. The brand is working on Moto E5 Plus, Moto E5 and Moto E5 Play. The Moto E5(XT1924-3) andE5 Play(XT1944-6)was spotted on Indonesia. The listing reveals that the smartphones could be launched for the Asian market before being rolled out in the European and American markets.

Earlier, twoMoto models were found with model No XT1922-4 and XT1922-5on FCC website which is expected to be Moto E5 and E5 Plus respectively. The listing confirms that the phones will come with 4000 mAh battery.