Micromax YU5 has been spotted on a GeekBench benchmarking website.

An unannounced Micromax smartphone which goes by the model name ‘Micromax YU5’ has been spotted on a GeekBench benchmarking website. The listing has revealed some of the expected specifications of the upcoming smartphone.

In the GeekBench listing which was first reported by MySmartPrice, the Micromax YU5 got 771 points in single-core test and in multi-core test it received 3823 points. As per the listing on Geekbench, the Micromax YU5 has 2GB RAM and Snapdragon MSM8953 which is essentially Qualcomm Snapdragon 625 1.80 GHz octa-core processor. The handset is based on the Android 8.1.0 operating system. From the specs, we expect Micromax YU5 could be an entry-level or mid-range smartphone. 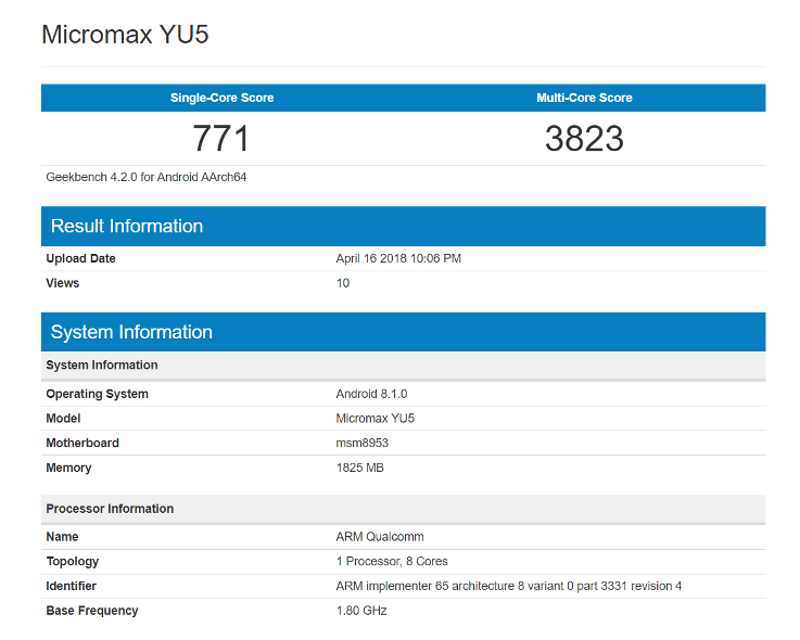 Last month, Micromax launched Bharat 5 Profor Rs 7,999. The major highlight of the device is the auto face unlock feature, OTG support which can be used to charge other devices and a 5000mAh battery capacity, which the brand claims gives a running time of 2 days and standby for 21 days.

Micromax Bharat 5 Pro sports a 5.2-inch HD display with a screen resolution of 1280×720 pixels. It runs on Android Nougat 7.1.1 and is powered by a 1.3GHz quad-core MediaTek MT6737 processor. The smartphone is equipped with a 13-megapixel rear and 5-megapixel front cameras with LED flash with autofocus.

Further, the Bharat 5 Pro is backed by a 3GB of RAM and 32GB of internal storage. Further, the storage can be further expandable up to 64GB via micro SD card slot. On the connectivity front, the device supports 4G VoLTE, WiFi, Bluetooth, GPS, dual-SIM and micro USB port.