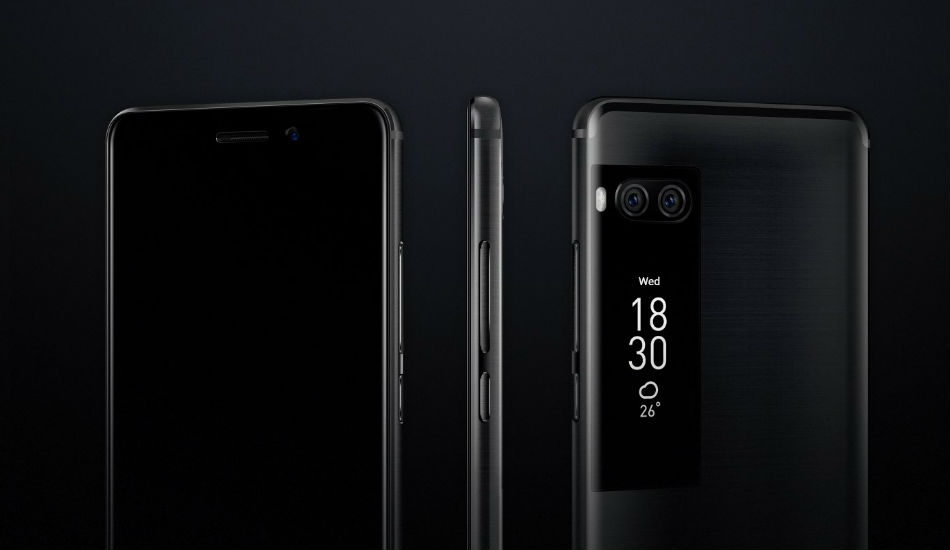 The major highlight of the Pro 7 smartphone is the dual screens which display information like notifications, weather, time, music and more.

The major highlight of the Pro 7 smartphone is the dual screens which display information like notifications, weather, time, music and more. The second screen can be also used for taking selfies with phone’s rear camera. It has a 1.9-inch secondary Super AMOLED display with a pixel density of 307ppi.

Another major highlight is the dual rear cameras which come with a combination of 12-megapixel sensors out of which one is used for taking monochrome pictures, while other captures RGB colours. The cameras further come with aperture f/2.0, 1.25-micron pixel size, Sony IMX386 sensors, PDAF and dual-tone LED flash. For the front, the device sports a 16-megapixel shooter for selfies and video calling.

The Meizu Pro 7 features a 5.2-inch Full HD Super AMOLED display with a screen resolution of 1920 x 1080 pixels. The smartphone comes in two processor variants: one is powered by an octa-core MediaTek Helio P25 processor along with Mali-T880 GPU, while the other sports a deca-core MediaTek Helio X30 processor with PowerVR 7XTP-MP4 GPU. However, it is still not known, which variant will make its Indian debut. The phone is backed by a 4GB of RAM and comes in 64GB and 128GB storage variants.

The device comes loaded with a fingerprint sensor and on the connectivity front, it supports 4G VoLTE, WiFI 802.11.ac, Bluetooth 4.2, GPS, dual-SIM and USB Type-C port.