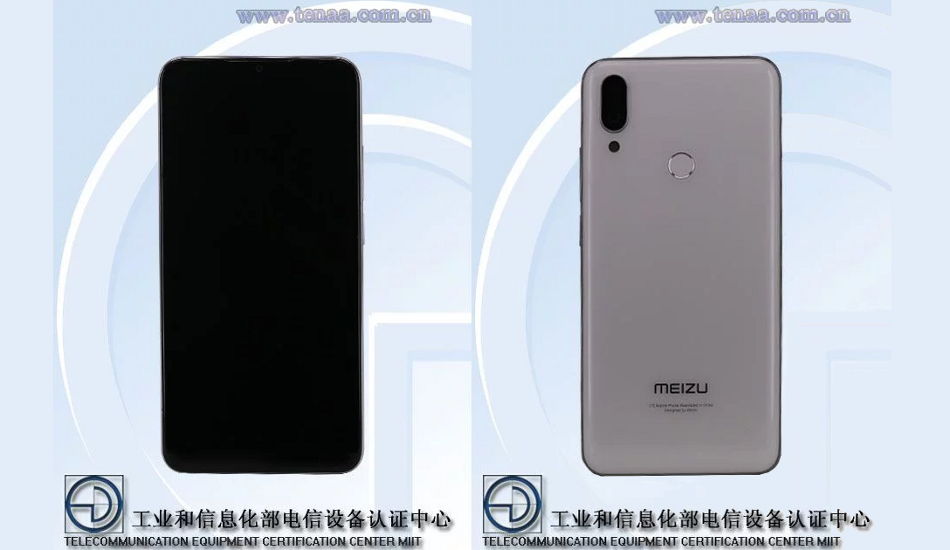 There is also a fingerprint scanner on the backside of the phone which is in contrary to earlier leaks which revealed that the smartphone will arrive with a side-mounted fingerprint reader.

Meizu Note 9 was recently spotted on the Chinese certification website, TENAA with full specifications. However, the listing did not include its images. Now Meizu Note 9 front and rear images have also surfaced on TENAA.

As per the TENAA images of Meizu Note 9, the smartphone features a waterdrop notched display. The back panel bears a glass design and it also sports vertically-aligned dual rear cameras at its top-left corner along with an LED flash. There is also a fingerprint scanner on the backside of the phone which is in contrary to earlier leaks which revealed that the smartphone will arrive with a side-mounted fingerprint reader.

Meizu Note 9 will be the successor of Meizu Note 8 which was launched last year. As per the earlier TENAA listing, the Meizu Note 9 features a 6.2-inch Full HD+ with 2244×1080 pixels resolution. The smartphone is powered by 2GHz Octa-Core Snapdragon 675 processor coupled with 6GB RAM and 64GB/128GB internal storage.

The Meizu Note 9 will have a dual camera setup of a 48-megapixel primary sensor and a 5-megapixel secondary sensor. For the front, the phone has a 20-megapixel camera. The phone dimensions are 153.11 x 74.34 x 8.65mm and it weighs 169.7 grams. It will come in in three colour variants – Black Ochre, White Ochre and Starry Blue. It runs on Android 9.0 Pie operating system out-of-the-box and is fueled by a 4,100mAh battery.