Meizu 16Xs spotted online ahead of launch on May 30

Meizu 16Xs will have 6GB of RAM and it will run on Android 9 Pie operating system.

Meizu 16Xs is all set to launch in China on May 30. Now ahead of the launch, the phone has been spotted on GeekBench benchmarking website revealing few of its specifications.

As per the GeekBench listing via Slashleaks, the phone will be powered by 1.71GHz octa-core processor. It is likely that the phone will have Snapdragon 675 chipset. The phone will have 6GB of RAM and it will run on Android 9 Pie operating system. It has scored 2392 and 5982 in the single-core and multi-core tests respectively. 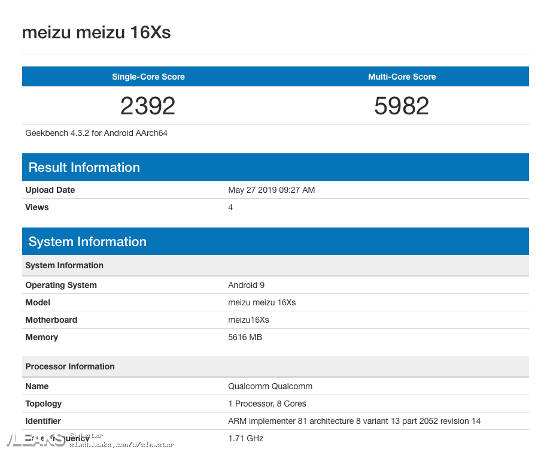 The TENAA listing of the Meizu 16Xs states that it features a 6.2-inch AMOLED display that has a resolution of 2232 x 1080 pixels. It is powered by an octa-core processor clocked at 2.0GHz. It features 4000mAh battery with fast charging and it will run on Android 9.0 Pie with company’s Flyme OS running on top of it.

Meizu 16Xs is equipped with a triple-camera setup with a combination of 48-megapixel rear camera with LED flash, Sony IMX586 sensor, 8-megapixel ultra-wide camera, and a 5-megapixel camera. There is a 16-megapixel front shooter for selfies and video calling. It features an in-display fingerprint scanner.

Meizu 16Xs with 6GB RAM, triple rear camera could be in works