Meizu 16Xs features 4000mAh battery with fast charging and it will run on Android 9.0 Pie with company’s Flyme OS running on top of it.

After numerous leaks, it has been finally confirmed that Meizu 16Xs will launch in China on May 30. The Meizu 16Xs is an upgraded version of the Meizu 16X phone which was launched last year.

The Chinese manufacturer took to Weibo to confirm that it will be launching the Meizu 16Xs smartphone on May 30. The teaser on Weibo reads “165g of Balance” which hints that the company is trying to express something about the weight of the device. As per earlier leaks, the phone will be backed up by a 4,000mAh battery in a body that weighs 162 grams. 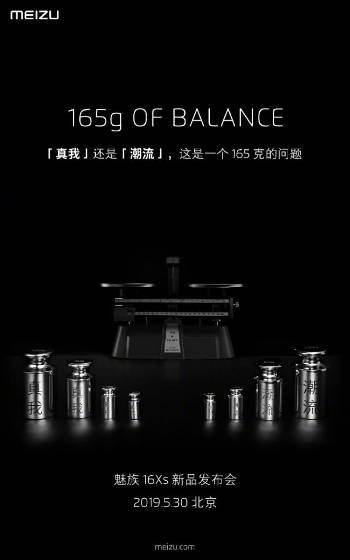 Meizu 16Xs was earlier spotted on TENAA with model number M926Q. The phone features a 6.2-inch AMOLED display that has a resolution of 2232 x 1080 pixels. It is powered by an octa-core processor clocked at 2.0GHz.. Meizu 16Xs is equipped with a triple-camera setup with a combination of 48-megapixel rear camera with LED flash, Sony IMX586 sensor, 8-megapixel ultra-wide camera, and a 5-megapixel camera. There is a 16-megapixel front shooter for selfies and video calling.

The Meizu 16Xs features an in-display fingerprint scanner. The phone is backed by 6GB of RAM and 64GB/128GB internal storage. It doesn’t come with a microSD card slot for storage expansion. It features 4000mAh battery with fast charging and it will run on Android 9.0 Pie with company’s Flyme OS running on top of it. The phone measures 152 x 74.4 x 8.35 mm and weighs in 162 grams.

Note- The Lead pic is of Meizu 16X