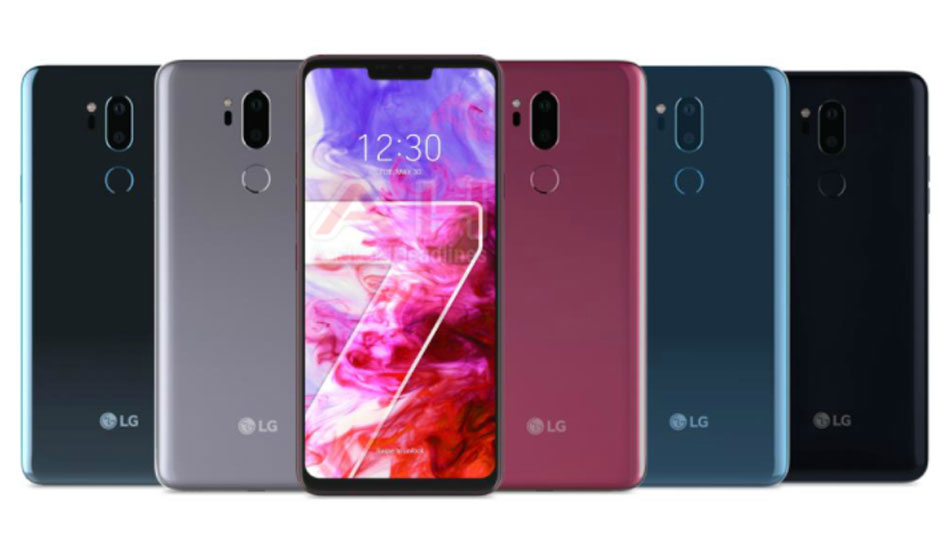 With an official launch set to be held on May 2, the LG G7 ThinQ now leaks in a press shot that showcases the flagship phone from all around, revealing its features in all its glory. A week after a render revealed an iPhone X-like notch on the LG flagship, a new press shot has surfaced online leaving nothing to be imagined about the design aspects of the device.

According to the press image sharedby tipster Evan Blasson Twitter, we can confirm that the LG G7 ThinQ device will now embrace the notch following the trend of notched displays ever since the iPhone X came into being. The silver variant in the render thus confirms that the G7 device will come with a unibody metal design with the fingerprint scanner now located at the back of the device. There will also be a Vision AI-powered face unlock feature that will bring facial recognition as a means of authentication.

The LG G7 ThinQ appears to feature a dual camera setup at the back aligned vertically next to each other with the LED flash placed next to it. The fingerprint scanner which is now at the back is placed below the camera unit. It appears that LG has taken a new approach towards Google Assistant as the G7 ThinQ phone looks to be featuring a dedicated button for triggering Google’s voice assistant.

If rumours are anything to be believed, the LG G7 ThinQ will feature a 6.01-inch FullVision MLCD display with an aspect ratio of 19.5:9 which results in a resolution of 3120 x 1440 pixels. If not for the notch at the top and the bottom chin, the phone qualifies for an all-screen display.

The LG flagship will be powered by Qualcomm’s latest Snapdragon 845 chipset with up to 6GB RAM and 128GB storage that will be allowed to be expanded to up to 2TB. The device will run on the latest Android 8.1 Oreo with the company’s LG UX interface on top. It’srumouredd that the upcoming flagship from LG will be water and dust resistant and will come with wireless and fast charging as well. The device will employ a USB Type-C port for charging and data transfers and will also feature a 3.5mm headphone jack which would surely be a blessing for traditional audiophiles.

With nothing still up for confirmation, we’d suggest you treat all of this with a pinch of salt and wait till LG officially announces the G7 ThinQ on May 2.