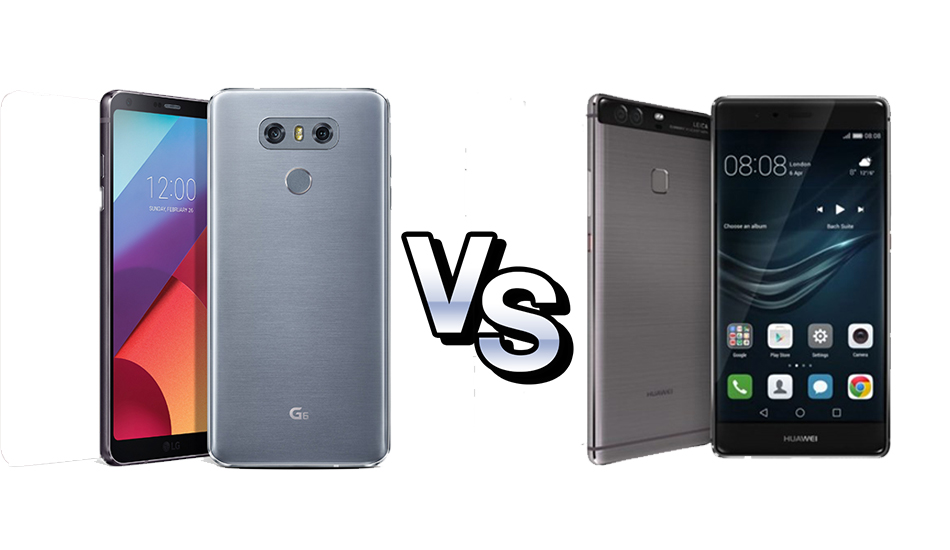 Both the smartphones come with premium design coupled with some really interesting internals and not to forget dual-camera setup.

LG and Huawei yesterday announced their this year’s flagship devices at the Mobile World Congress 2017. LG came up with G6, while Huawei unveiled P10 and P10 Plus. Both the smartphones come with premium design coupled with some really interesting internals and not to forget dual-camera setup. With LG G6 the company is banking high to regain its lost position in the smartphone market, while Huawei wants to establish itself as a premium brand with the launch of this year’s flagship devices. But, which one is better? To answer this, let’s put both the devices against each other and see who emerges as a clear winner.

Both of them are designed marvel in their own right. The LG G6 touts to come with a large display crafted in a smaller chassis, while the Huawei P10 Plus scream premium looks from all angles. To start with the LG G6, the smartphone comes with a combination of metal and glass, with glass body covering the front and back panel of the device, while the metal at the edges gives a solid build to the device. The rear glass panel comes with Corning Gorilla Glass protection as well. Moving on, the Huawei P10 Plus comes with a hyper diamond-cut finish at the back, which the company boasts add strength, makes it less slippery and gives a stylish look.

On one hand, the LG G6 comes with minimal side bezels coupled with a flat display, while on the other the Huawei P10 Plus has a gentle curve which gives an edge-to-edge display feel. The Huawei P10 Plus is thinner with 6.9mm thickness as opposed to the 7.9 mm thickness of the LG G6, but the latter is lighter with 163 grams as compared to 165 grams of the former. The Huawei P10 Plus wins this rounds with the sheer number of colour variants available which includes Dazzling Blue, Greenery, Graphite Black, Rose Gold, Mystic Silver, Dazzling Gold, Prestige Gold and more. But that doesn’t mean LG G6 is a bad looking device, it surely comes with some amazing form factor and the large display in small chassis is clearly the star of the show.

On the display front, the LG G6 has a clear advantage over Huawei P10 Plus. The G6 comes with a 5.7-inch QHD+ FullVision Display with an unusual aspect ratio of 18:9 and a screen resolution of 2880 x 1440 pixels (pixel density of 564ppi). The Huawei P10 Plus sports a 5.5-inch 2K display with a screen resolution of 2560 x 1440 pixels. Looking at the sheer numbers, LG G6 has a better display with higher resolution coupled with Dolby Vision and HDR 10 technology, which makes it a great device for media consumption on papers.

Both the smartphones packs some interesting internals. The LG G6 is powered by a quad-core Qualcomm Snapdragon 821 processor coupled with 4GB of RAM and comes with two storage variants of 32GB and 64GB which can be further expanded up to 2TB via MicroSD card. The Huawei P10 Plus comes loaded with company’s in-house 2.35 GHz Octa-Core Kirin 960 chipset and Mali-G71MP8 GPU for graphics. The P10 Plus comes in 4GB or 6GB RAM options. Not only this, Huawei has included in a new ‘Ultra Memory’ technology which uses less memory for faster performance. We get 64GB and 128GB of internal storage option which can be further expandable via microSD card which sits in a hybrid-Dual SIM (Nano + Nano). Looking at the sheer specs sheet, the competition is real close as both the smartphones come with some interesting specifications, and as of now, we will call this round as a tie.

This is where it gets interesting. Both the smartphones come with a dual-camera setup, which has a different function altogether. Starting with Huawei P10 Plus, the device carries a Leica 2.0 dual-camera set up at the back with a 20-megapixel Monochrome Lens and a 12-megapixel regular lens with f/1.8 aperture, OIS, Pro Mode, Hybrid Zoom etc. The LG G6 sports a 13-megapixel with 125-degree wide-angle lens with aperture f/2.4 and a 13-megapixel standard camera with f/1.8 and standard optical Image stabilisation (OIS). The functioning of the dual camera setup is completely different on both the devices. On one hand, the LG G6 stands tall with a wide angle lens, which will allow users to click landscape photos, without many hurdles, while on the other, the P10 Plus monochrome sensor is ideal for taking portraits with multi-level bokeh effect.

For the front, the LG G6 comes with 5-megapixel camera with a wide viewing angle of 100 degrees and an aperture of f/2.2, which the company touts can take group selfies quite easily. The Huawei P10 Plus sports a Leica-branded 8-megapixel selfie camera as well with Adaptive Selfie technology. However, looking at the sheer of number shooting modes and camera pixels, the Huawei P10 Plus has a slight advantage over G6 as it comes with a better front-facing camera, but when it comes to dual-camera setup, both the smartphones comes with different functionality and if you ask us, then we will an advantage to P10 Plus over LG G6.

Both the smartphones run on the latest Android 7.0 Nougat with LG G6 has its own UI on top of it, while the Huawei P10 Plus has EMUI 5.1 running on top of it. Both alterations of the Android Nougat has some interesting features as well. With the two smartphones having different Android versions, we will let this one pass, as it will boil down to consumer preferences.

On the battery front, the LG G6 3300mAh of non-removable battery with Qualcomm Quick Charge 3.0 for fast charging. LG has learnt from Samsung’s mistake and has installed heat pipes, which is made from the thermal conductor for transferring heat away from the processor. Coming to the Huawei P10 Plus, the device packs in a 3750 mAh battery with Huawei’s fast charge technology which company claims can give you full day’s battery in just 30 minutes. Both of them sports a Quad HD resolution which means that it will be power hungry, but if you ask us to choose one, then we will go with Huawei P10 Plus as it has a larger battery backup.

On the connectivity front, the LG G6 supportWi-Fi 802.11 a, b, g, n, ac, Bluetooth 4.2 BLE, NFC, and USB Type-C 2.0. The device also comes equipped with32-bit Hi-Fi Quad DAC. The Huawei P10 Plus also support most of the connectivity options but lacks a Hi-Res chip, which gives a brownie point to G6 as it comes with latest USB Type-C 2.0 coupled with Hi-Fi audio.

To wrap up, both the smartphones offer some premium design language coupled with some impressive specs sheet. On one hand, LG G6 stands tall in the display department, while on the other Huawei P10 Plus has a premium design element coupled with some good battery backup and Leica-branded dual-camera setup. Both of them are designed marvel and it boils down to what you want. If you like a large screen with small form factor then LG G6 is the one for you, while if you are looking a premium device with some unique colours, then Huawei P10 Plus is tailored made for you.