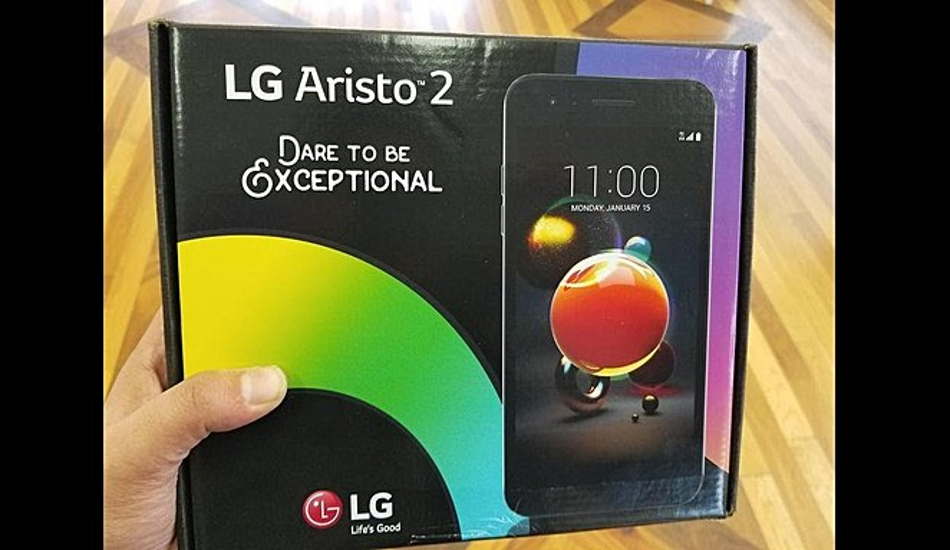 The LG Aristo 2 runs Android Nougat 7.1.2 operating system out of the box and will be backed up by 2,410 mAh battery.

LG launched LG Aristo smartphone last year in January. Now seems the company is working on its successor which is dubbed as LG Aristo 2. The retail packaging and the user-manual for the device have leaked online which has revealed the upcoming smartphone’s design and key specifications.

As per the leak by Slashleaks, LG Aristo 2 will sport a 5 inch HD display with 1280 x 720 pixel resolution and it will be powered by 1.4GHz quad-core Qualcomm Snapdragon 425 processor. The smartphone will have 2GB RAM and 16GB internal storage.

The LG Aristo 2 runs Android Nougat 7.1.2 operating system out of the box and will be backed up by 2,410 mAh battery.

The LG Aristo smartphone was made available for purchase through MetroPCS stores and T-Mobile for $59 (approximately Rs 4,008). The LG Aristo 2 is also expected to arrive at T-Mobile and MetroPCS in the coming days.

The LG Aristo features a 5-inch HD (1280×720) IPS display and is powered by a quad-core Qualcomm Snapdragon 425 processor with an Adreno 308 graphics chip. The LG Aristo comes with 1.5GB of RAM and 16GB of internal storage, which can be further expandable up-via micro SD card. There is a fingerprint sensor also located on the backside of the LG Aristo.

The LG Aristo runs on Android 7.0 Marshmallow operating system and comes packed with 2410 mAh battery. The smartphone sports a 13-megapixel primary camera with autofocus and LED flash. In its front, it has a 5-megapixel secondary camera for selfies and video calling. Besides, the smartphone offers 4G LTE with VoLTE, Bluetooth 4.2, WiFi, WiFi Calling, GPS, and a micro USB port.