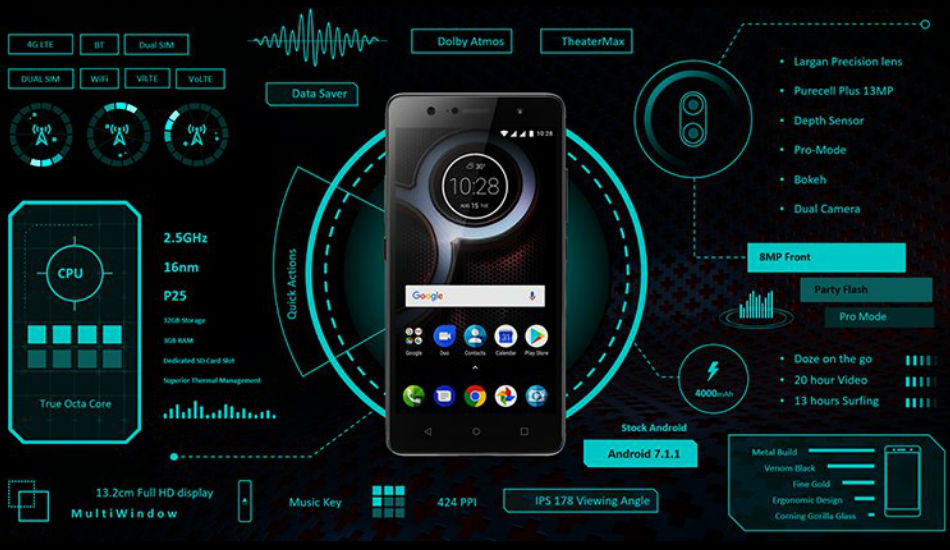 The smartphone will be available in Venom Black and Fine gold colour options.

Lenovo has added a new member to its smartphone portfolio with the launch of Lenovo K8 Plus in India. The smartphone will be available in Venom Black and Fine gold colour options and comes with a price tag of Rs 10,999. It will be available from Flipkart starting from 12:00 PM. The company will also launch a special edition with 4GB of RAM and 32GB of internal storage during Diwali period.

The major highlight of the smartphone is the dual-camera setup at the rear panel, which comes with a combination of 13-megapixel and 5-megapixel sensor. The primary sensor comes with Purecel Plus sensor, while 5-megapixel comes with Samsung depth sensor, which is used to give a bokeh effect. For the front, there is an 8-megapixel shooter with f/2.0 aperture, 84-degree wide angle lens, Beautify mode and front flash.

The smartphone comes with a metal unibody with aluminum 500 series at the back. The device features a 5.2-inch full HD display with a screen resolution of 1920 x 1080 pixels with 450nits brightness and 178-degree viewing angles. The display comes with Corning Gorilla Glass protection and oleophobic coating. Under the hood, the smartphone is powered by a MediaTek Helio P25 octa-core processor clocked at 2.6GHz.

The phone is backed by a 3GB of RAM and 32GB of internal storage, which is expandable up to 128GB through a dedicated microSD card. The phone runs on Android 7.1.1 Nougat, which will be upgraded to Android Oreo pretty soon. It is backed by a 4000mAh battery, which the company claims can last up to 2 days. The phone comes with a fingerprint sensor at the back panel and it also supports Dolby Atmos for an immersive sound experience. There is also a music key, which is can be also used to open different apps as well. On the connectivity front, it supports 4G VoLTE, Bluetooth, WiFi, micro USB port and dual-SIM.

Meanwhile, the company has also unveiled the Lenovo K8 as well, which will be coming soon to the retail stores. The smartphone features 5.2-inch HD display along with metal unibody design. It will be powered by a 2.3GHz MediaTek Helio P20 processor along with a13-megapixel rear camera and 8-megapixel selfie camera. The device will be backed by a 4000mAh battery and it will run on Android 7.1.1 Nougat. However, the company has not revealed the pricing of the device.