Meanwhile, Lenovo has been teasing the processor that will power the upcoming Note series phone will be killer.

Off late, Lenovo has been teasing its next Note series smartphone in India which is most likely to be dubbed as Lenovo K7 Note on it’s official social media channels. Now ahead of launch, another note series smartphone named as Lenovo K8 Note has been spotted on the Geekbench benchmarking website. The listing has spilt some beans on the expected specifications of the upcoming smartphone.

In the GeekBench listing, the Lenovo K8 Note got 1659 points in single-core test and in multi-core test it received 4844 points. As per the listing on Geekbench, the Lenovo K8 Note has 4GB RAM and MediaTek Helio X20 1.39 GHz deca-core processor. The handset is based on the Android 7.1.1 Nougat operating system. 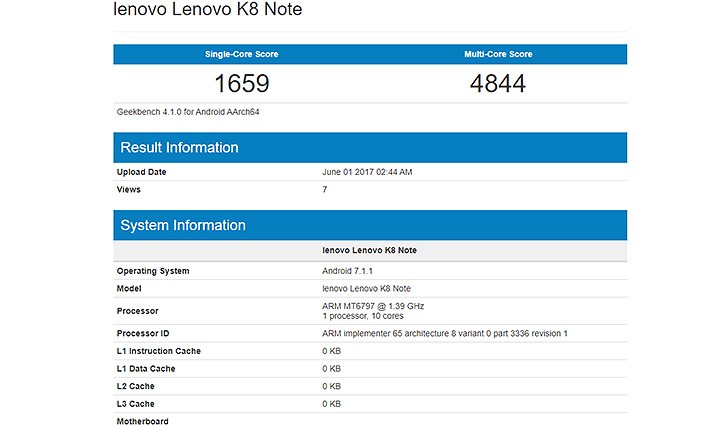 Meanwhile, Lenovo has been teasing the processor that will power the upcoming Note series phone will be killer. The Lenovo K7 Note is expected to come with either the Snapdragon 630 or the Snapdragon 660 processor. Or it might just come with a better Helio X20 SoC whose hopes are less keeping in mind the mid range a K-Series of Lenovo. Lenovo K7 Note is expected to feature a 5.5-inch display, Snapdragon 660 chipset, 4GB RAM and 32GB internal storage.

As of now, we have no idea if the company is going to launch Lenovo K7 Note or Lenovo K8 Note. But keeping in mind the latest Geekbench spotting, we can expect the spotted device to be another Lenovo K7 Note variant with a different chipset. There is no information about the pricing and availability of the device as yet, however, given the fact that it has been spotted GeekBench, it will not be much long before we see some new leaks revealing the pricing as well. So we request you to stay updated on our website for the same.