iQOO 9 series launch set for January 5: All you need to know

iQOO 9 series is all set to debut on January 5. The Pro model should have a BMW M MotorSport Limited Edition variant. 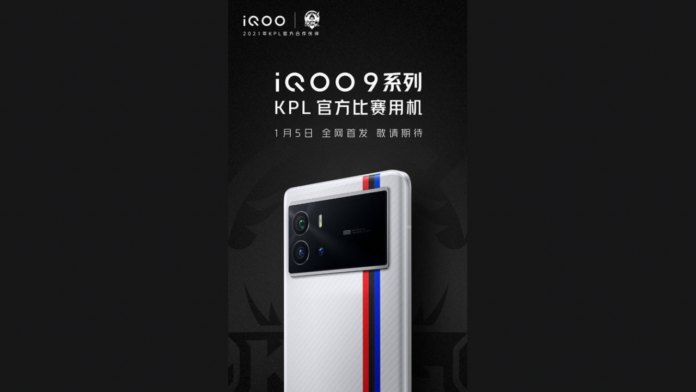 Further with the launch date reveal, iQOO also shared the teaser image for the iQOO 9 Pro, revealing how the smartphone will look from the back. It will have a horizontally stretched camera module ditching the vertical camera array design scheme that iQOO had for both the iQOO 7 and 8 series. Moreover, it will retain the BMW-inspired three-stripe design and the camera module also reveals that the setup will support Optical Image Stabilisation (OIS). Moreover, Justin Jian, product manager of iQOO has also confirmed that the iQOO 9 series will have a BMW M Motorsport Limited Edition like the previous generations.

iQOO seems to have also sponsored a gaming tournament recently and the promotional images from the tournament further reveal how the smartphone will look from the front. It will seemingly have thin bezels around the display with a slightly thicker chin. There should be a volume rocker and a power button on the phone’s right spine.

The leaks in the past not only revealed the design of the smartphone but also the specs for both the smartphones in the series. Per leaks, the iQOO 9 Pro may feature a 6.78-inch curved AMOLED screen with a QHD+ resolution which is the same as the iQOO 8 Pro. The iQOO 9 on the other hand should sport the same sized screen but with a flat-screen panel and FHD+ resolution. Both phones may have support for 120Hz refresh rate as well. It is expected to be a Samsung E5 AMOLED panel with a centre punch-hole cutout on the top for the camera.

As for the cameras, the Pro model should feature a 50MP primary lens while details for the vanilla model haven’t been revealed yet. The iQOO 9 Pro should draw power from the Snapdragon 8 Gen 1 SoC while its unclear if the regular model will also have the same chip or a different one. Moreover, the iQOO 9 series could pack a 4700mAh battery with a 120W fast charging support.

iQOO 8 series launch skipped in India and the iQOO 7 series remained the only flagship offerings form the brand in the country throughout this year. However, rumour mill has it that iQOO is planning to launch the devices in India next year. Tipster Mukul Sharma claims that the iQOO 9 India Launch will take place by end of January 2022. This means that pre-bookings and sales for the smartphone could begin as soon as February next year.

With iQOO 9 series, iQOO plans to offer a premium experience to the users. It will be interesting to see how the brand prices the devices in India considering it has a good reputation so far in the country when it comes to launching value for money devices.