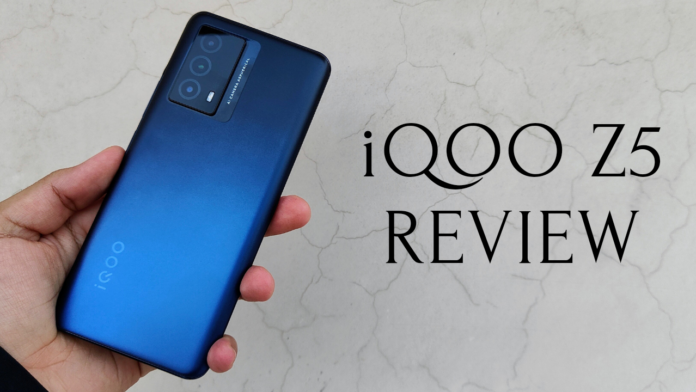 When iQOO entered the Indian market with the iQOO 3, it was a head-turner because of its price to performance ratio. Since then, iQOO hasn’t missed its mark in impressing its fans in the country, be it the iQOO Z3, iQOO 7, or 7 Legend. Now, it’s back with another smartphone in the mid-range segment, the successor to the iQOO Z3, called the iQOO Z5. The device comes with a starting price of Rs 23,990, which is very competitive. Here’s our review of the iQOO Z5, where we take a look at what it has to offer.

As far as the design is concerned, there are quite a few changes compared to the iQOO Z3. This time, there’s a bigger camera array but with the same number of cameras. It has a wider form factor to hold and iQOO has ditched the waterdrop notch on the front for a punch-hole housing the front camera. The company has adopted a more modern design with the iQOO Z5.

There’s nothing on the left, while on the right, you get the power button that also doubles as a fingerprint sensor and the volume buttons. The buttons aren’t very clicky but will do the job. As for the fingerprint, it’s quick and accurate in detecting fingerprints and unlocks the device instantly. The back panel and frame is made of plastic. However, the rear has a textured finish, making it look and feel premium. And it is definitely better in preventing fingerprints which the iQOO Z3 failed at. In comparison with the competitors such as the Galaxy M32, we feel this design is balanced and is more appealing at the same time.

You have a 3.5mm headphone jack and a mic on the top spine. There’s a mic, a SIM tray, a Type-C port, and a speaker on the bottom. There’s also a speaker on the top, and fortunately, this stereo speaker setup sounds much better than the mono speaker we had on iQOO Z3. It has a slightly muffled sound profile but is louder and gives an immersive experience compared to Z3. Moreover, there’s also a better haptic linear motor than the Z3 which mostly rattled and didn’t feel great at all. With Z5, things get much better, and the haptic motor feels really good.

On the front, the iQOO Z5 gets a 6.67-inch full HD+ IPS LCD display with a screen resolution of 1080 x 2400 pixels and a 20:9 aspect ratio, 120Hz refresh rate and HDR10. The LCD panel doesn’t look very different from the Z3 and is as good. It doesn’t feel like a downgrade but isn’t an upgrade either. You can get AMOLED panels at such a price point, but some lack resolution while some have a low refresh rate, such as on the OnePlus Nord CE.

During our review of the iQOO Z5, we feel it gets the same level of clarity and similar colour accuracy as the iQOO Z3. It has the same refresh rate at 120Hz but has a slightly bigger size. It gets bright enough under direct sunlight but brightness levels should have been better when indoors. You can also choose between 60Hz, 90Hz and 120Hz refresh rates, which is a nice touch.

Talking about software, the device comes with FunTouch OS 12 out of the box which is based on Android 11. It gets power from the Snapdragon 778G SoC with up to 12GB of RAM and 256GB of storage. We got the 12GB + 256GB variant that handled everything very well during the review period of iQOO Z5.

There’s enough power to run heavy tasks with ease. The software well-handled app switching, app opening, app retention in memory. As for FunTouch OS 12, coincidentally, we also had the Vivo X70 Pro when we were testing the iQOO Z5. Again, the experience is very much identical except for a few minor changes.

FunTouch OS 12 does improve compared to the previous version that was annoying with some features. You also get the extended RAM feature that uses some internal storage as RAM for a better experience. Our device used up to 4GB of internal storage as extended RAM. The software will intelligently use less storage if you have less storage left. In addition, FunTouch OS 12 gets a bunch of customization features such as dynamic effects, custom animations for various scenarios such as lock/unlock animation, charging animation, fingerprint animation, motion gestures, ultra game mode and more.

In conclusion, the software has improved in many aspects than the last generation in terms of both performances, animation speeds, etc. Compared to the Vivo X70 Pro, there were very few software changes such as a Monster mode on the iQOO Z5 which wasn’t available on X70 Pro. Also, some specific custom animations were missing on the iQOO Z5 while the X70 Pro had them. If we compare the software with the likes of OneUI on Samsung Galaxy M52 or Xiaomi 11 Lite NE 5G, yes it does miss out on features which some might like.

iQOO also advertises the Z5 as a gaming smartphone with a 28837mm² Liquid Cooling System, which can cool the smartphone’s surface by up to 3 degrees. In addition, there’s support for up to 240Hz touch sampling rate and 4D game vibration as well. The above-mentioned features work very well when playing games such as Call Of Duty Mobile or PUBG: New State. There weren’t any noticeable lags or heating, and the experience was smooth overall.

iQOO Z5 packs a massive 5000mAh battery, a considerable bump up from Z3 that had a 4400mAh cell. However, iQOO lowered the charging speeds from 55W in Z3 to 44W in the Z5. As a result, it charges slower because the charging speed has been reduced and battery capacity has been increased. It took me around 50 minutes to charge the device from 23% to 100%. It should have taken more than an hour if you charge it from completely empty to full.

Talking about the battery backup, I got a good 6 hours and 37 minutes of screen-on time and 3 hours of playing Call Of Duty on high graphics. I even did browsing for around 2.5 hours with some other tasks, including chatting. Without gaming, the iQOO Z5 can easily last more than a day on a single charge with moderate to heavy use based on our review. To conclude, the device gives a great battery backup be it normal or heavy usage.

This camera setup is identical to what we have on the iQOO Z3 except for the 2MP depth sensor swapped for a Macro camera on the iQOO Z5. Talking about the camera app, it is simple to use and is similar to what we had in the iQOO Z3. As for the shots with the primary camera, these came out to be pretty sharp and with a good amount of detail. In addition, the colours looked surprisingly natural with a decent dynamic range.

Talking about wide-angle shots, these weren’t as good as those clicked with the 64MP camera. Even though there wasn’t a major colour shift in comparison to the primary cam shot, the wide-angle pictures lacked details and sharpness. I didn’t expect to say this, but the wide-angle sensor is just bad. There’s also a considerable amount of fish-eye effect at the edges, making the photos look weird. The only decent features of the wide-angle shots were field-of-view and colours.

The 2MP macro camera doesn’t click good photos either. Macro shots look good only at a glance but once you start to observe it carefully and zoom in, there’s again no detailing in the pictures. The colours and exposure both were inconsistent. The portrait shots, however, were as impressive.

With a good amount of bokeh and accurate edge detection, the portrait shots were also excellent with the colours. I did face an issue with the focus as the camera repeatedly denied focusing on the object I wanted it to focus on. Even auto-focus wasn’t able to pick up the object quickly and it was able to focus only after multiple tries.

The 16MP selfie sensor does click good selfies. These are filled with details and good looking colours. The skin tone was kept as natural as possible and the background also looked decent. Portrait selfies were also decent as edge detection was good enough. You cannot expect a lot of detailing for night shots, but the camera plays well with colours when night mode is ON.

Under low lighting, the photos look average at best because there’s a smudged effect when you zoom in. The colours, however, are kept untouched which is good. Under artificial lighting, the camera picks up details and outputs a slightly sharper picture. But the colours are a bit more saturated than normal. 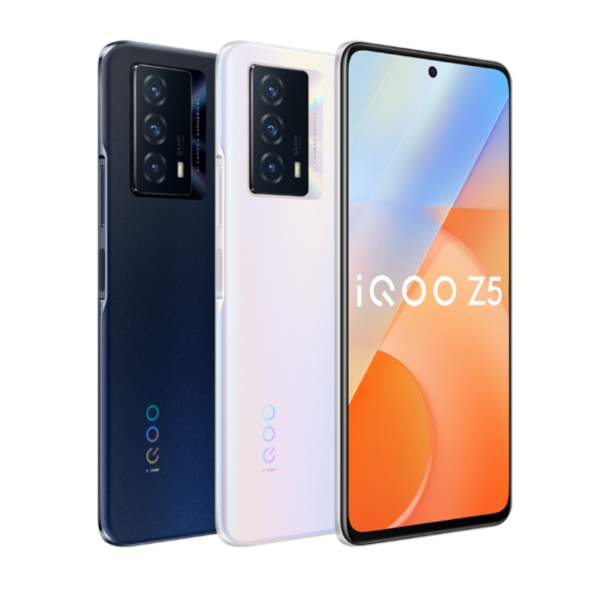 Load more
iQOO Z5 Review: A minor or a major upgrade?The iQOO Z5 may not be a major upgrade in terms of specifications than the iQOO Z3, but it's all about the experience with this one. With better haptics and speakers, a slightly better processor, the IQOO Z5 does feel like a win. A trade-off you would be making though, is in terms of additional cameras as they could have been much better.