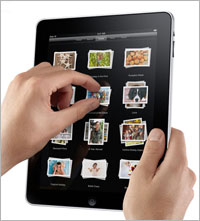 Apple is all set to launch its celebrated iPad next week. The device will be available at prices ranging from Rs 35,000 to Rs 40,000. The best part of the deal is that it will not be network locked like an iPhone, which is available only with Airtel or Vodafone.

Good news Apple fans! iPad will be available in stores starting first week of February in India. Unlike iPhone, which is available only with Airtel and Vodafone, it will not be locked by any network or service provider.

At this price, Apple is sure to shake up the tablet market in India and at a price tag of Rs 31,000 Samsung Galaxy Tab is just Rs. 4000 cheaper than the cheapest iPad, we are sure that Samsung will have to think about its pricing strategy.

Although there is no doubt that the Galaxy Tab is a capable device, its 7 inch screen is relatively smaller than that of an iPad, which has a10 inch screen.

Moreover, iPad has an iconic status which the Galaxy Tab lacks. For Samsung to remain in competition it needs to revise the price.

Samsung on the other hand has some advantages and its retail strength is a major one. While Apple has very few stores in India, Samsung has a pan India distribution network that is well established.

Apart from that Samsung is also planning an upgrade of its Galaxy Tab. We do not have many details about the upgrade, but we do know that a Galaxy Tab with a bigger screen size is around the corner.

There are two more tablets available in India namely – Olive communication’s OlivePad and ViewSonic ViewPad 10. Both tablets are almost identical and are powered by Android 2.2 OS and a 600 GHz processor. However, they do not compare with iPad in terms of quality, finesse or brand value. Both are priced around Rs 10,000 less than the iPad.

Will that work in favour of these tablets? We don’t think so. iPad pricing in India is fairly attractive. Tablets in India have an aspirational value and Apple can satiate that like no other.

There is another device which can be categorised as a tablet. And it is Toshiba libretto W100, which is a dual screen tablet with two touch screens measuring7 inch each. Still it has not been a successful device in the market, with only a few pieces being sold since June last year. On paper the device is attractive, as it comes with Windows OS, 1.2 Ghz intel processor, 2 GB of RAM and 64GB storage.

But the biggest dampener is it’s price and perhaps a lack of marketing efforts. The laptop sells for Rs 44,000 which is steep, as the hardware doesn’t really justify the cost.