Images and details of the upcoming Sony Ericsson handset, codenamed Nozomi, have been leaked online by iAndroid.co.il, an Israeli Android forum.

Sony Ericsson Nozomi might be branded as the Xperia Arc HD bearing the 4.3 inch display that will feature 720p HD native resolution. The Mobile Indian reported about this Xperia arc HD being under development. 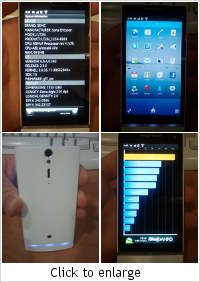 Nozomi might be one of the many firsts for Sony Ericsson to feature 720p HD display and dual-core processor. The Nozomi handset will have 4.3 inch display that will come with 1280×720 pixel resolution to display images and text more crisply than other top of the line handsets. Also to pack ample power, Sony Ericsson has added dual-core 1.5 GHz Qualcomm Snapdragon MSM 8660 processor coupled with 1 GB RAM out of which only 691 MB will be available to user. The benchmark score screenshot gives a clear view that the phone does have a powerful hardware inside.

As per the Nenamark Benchmark results hints that the smartphone will come with Adreno 220 GPU which is expected to be faster with better graphics muscle. Currently, the Nozomi is being tested using Android 2.3.5 Gingerbread update and eventually might release with the same. However, this smartphone would be upgradable to Android 4.0 Ice Cream Sandwich.

Leaked images give a fair view of the Nozomi smartphone that has white back panel and has camera at the back. One thing worth noting is the bluish LED line that is located just under the display in the front and continues to exist on the back. In the front, the glowing LED strip offers access to three capacitive buttons &#151 Home, Back and Menu.

From the looks, the Nozomi seems one of those slim and light form factor handsets from Sony Ericsson. From the images it seems that the smartphone is almost ready to launch which may take place sometime in January 2012.