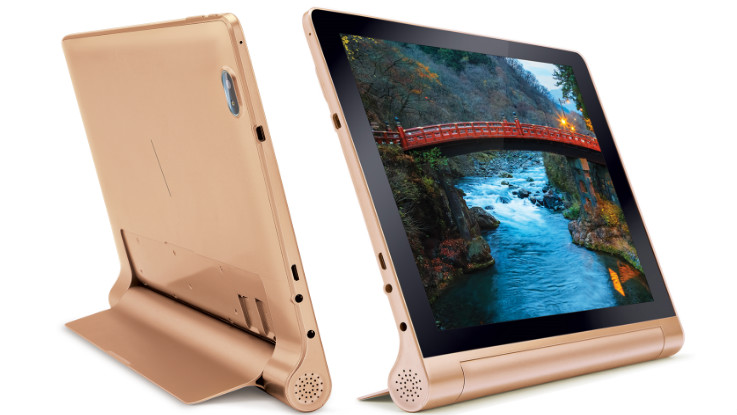 iBall has announced the launch of its latest tablet in the Slide series in India. Dubbed as Slide Brace-XJ, the tablet is available at price of Rs 19,999 in Gold colour option.

The major highlight of the latest tablet is the massive 7,800mAh battery, which is a pretty rare thing to find on a tablet. The tablet bears a metal unibody and it has a similar design language as seen in some Lenovo Yoga tablets. The device comes with a 10.1-inch HD IPS display with a screen resolution of 1280 x 800 pixels. It is powered by a 1.3GHz octa-core processor along with Mali-T720 GPU. The device also features a flexible kickstand.

The iBall Slide Brace-XJ is backed by a 3GB of RAM and 32GB of internal storage, which can be further expanded up to 64GB via micro SD card slot. The tablet sports an 8-megapixel rear camera with LED flash and a 5-megapixel front-facing camera for selfies and video calling. The device runs on Android 7.0 Nougat and on the connectivity front, it supports 4G VoLTE, WiFi, Bluetooth 4.0, USB OTG, micro HDMI, USB 2.0 and GPS.

“We expand the boundaries of every aspect, at iBall. And to sustain our signature of excellence, we have come up to embrace the future of tablets with iBall Slide Brace-XJ,” Sandeep Parasrampuria, CEO and Director – iBall, said in a statement.

Previously, the brand introduced Slide Enzo V8 tablet in India for Rs 8,999. The tablet comes with a 7-inch IPS display with a screen resolution of 1024 x 600 pixels. The device is 10.11mm thick and has an all-metal design. It is powered by a quad-core processor with a 2GB of RAM and 16GB of internal storage, which can be further expanded up to 32GB via micro SD card slot.

On the camera front, it sports a 5-megapixel rear camera with LED flash and autofocus, while for the front, there is a 2-megapixel shooter with LED flash as well. The tablet runs on Android 7.0 Nougat and is juiced up by a 3500mAh battery. The tablet does not feature the fingerprint sensor.