Huawei will be launching Huawei Y9 Prime 2019 in India on August 1. Amazon India recently started teasing the arrival of the new phone on its portal. Now the e-commerce website has confirmed the launch date vas well. 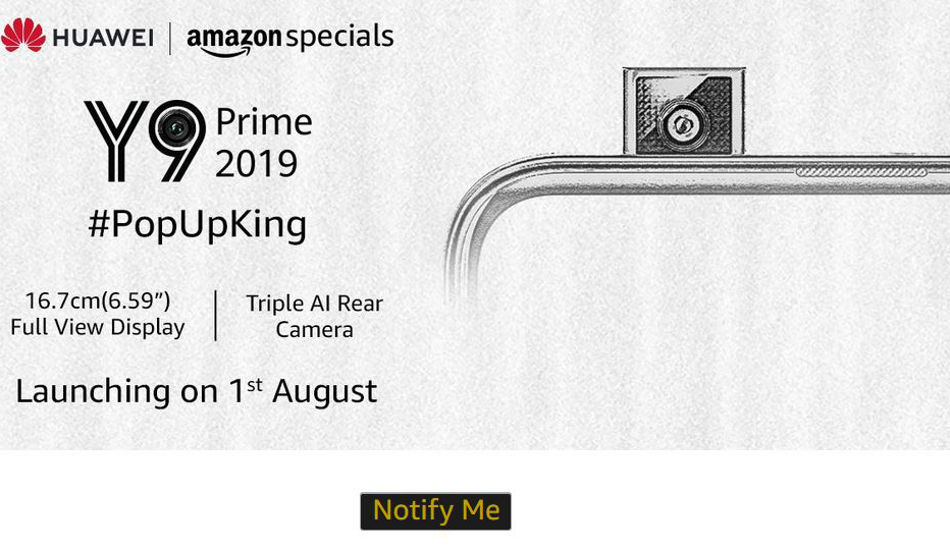 The listing on Amazon comes with a Notify Me option which will allow customers to be notified about all the updates related to the launch, availability, pricing, offers and more. Further, the listing highlights the features of the upcoming phone such as 6.59 FullView display, pop-up-selfie camera, 4000mAh battery and Snapdragon 710 processor.

The phone will be sold in a single 4GB RAM +128GB storage option in the country. It will come in Emerald Green and Sapphire Blue colour variants.

The Huawei Y9 2019 has a 4000mAh battery which charges via a USB Type-C port. There is a rear-mounted fingerprint sensor. It runs EMUI 9.0 based on Android Pie. Connectibityoptions include GPS, USB-Type C and 4G LTE support. Bluetooth and Wi-Fi.

Huawei pop-up camera smartphone to launch in India this month under Rs 20,000

Huawei Y9 Prime 2019 to launch in India soon via Amazon