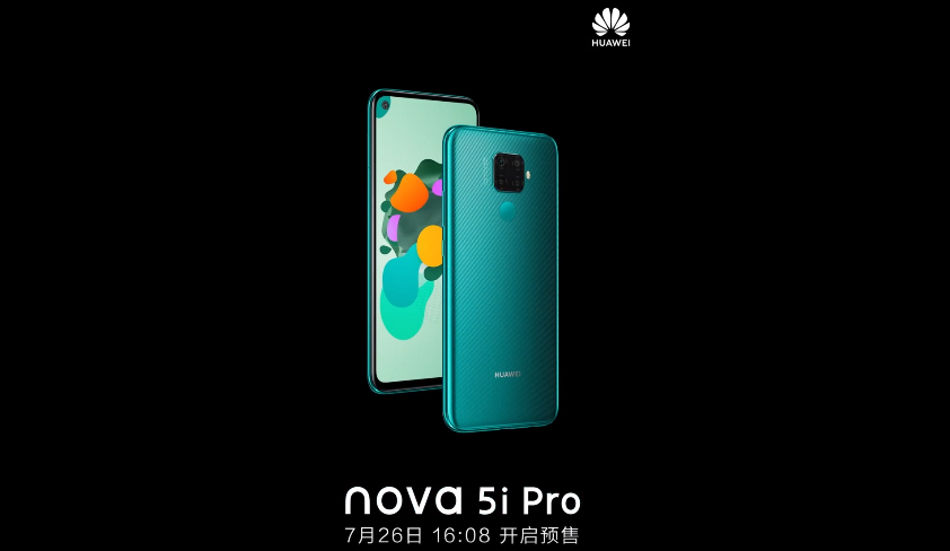 Huawei Nova 5i Pro will be available in three colour options – teal/green, gradient blue, and black.

Huawei Nova 5i Pro will be launched on July 26 in China. Now just ahead of the launch, key specifications, alleged press renders, and colour variants of the upcoming smartphone have been leaked online.

As per a report of MySmartPrice, incollaboration with tipster Ishan Agarwal shows press renders of the Huawei Nova 5i Pro phone. It will be available in three colour options – teal/green, gradient blue, and black. As per the renders, the phone features quad rear cameras and a fingerprint sensor lies just below it. The phone’s display has a punch-hole design with a cut out for the camera at the top left corner.

As far as specifications go, the Huawei Nova 5i Pro aka Huawei Mate 30 Lite is said to feature a 6.26-inch Full-HD+ display with a hole-punch design. It will be powered by a Kirin 810 SoC coupled with 6GB RAM and 128GBinternal storage. However, the phone is likely to come in another variant also with 8GB RAM.

The rear quad-cameras will have a primary 48MP sensor (f/1.8), an 8MP wide-angle lens, and a couple of 2MP shooters. One of them is a depth sensor while the other is a macro lens. The front camera is a 32MP (f/2.0) sensor. The phone will reportedly offer a dedicated night mode that will let users capture brighter low-light selfies with more details. It will have a 4,000mAh battery.

Chinese telecom authority, TENAA had also recently approved Huawei Mate 30 Lite (Nova 5i Pro) with the specifications listed in detail. As per TENAA listing, the phone will feature a 6.26-inch Full HD+ display with a screen resolution of 2340 x 1080 pixels. It will be powered by an octa-core Kirin processor clocked at 2.2GHz coupled with 6GB RAM + 128GB of internal storage and 8GB RAM + 256GB of internal storage. The EMUI 9 based Android 9 Pie OS will be preinstalled on the device and it will be backed up by 4,000mAh battery.