Huawei Nova 5 will feature a waterdrop notch on top of the display.

Huawei Nova 5 series including Nova 5 and Nova 5i are set to be launched in China on June 21. Now ahead of the launch, the case renders of the Nova 5 have surfaced online.

As per the render of the protective case leaked by Slashleaks, the Nova 5 will feature a waterdrop notch on top of the display. Since the rear of the case does not show any cutout for the fingerprint sensor, it is likely that the phone will have an in-display fingerprint sensor.

The rear of the protective case shows four camera sensors which are arranged vertically along with an LED flash. The quad camera setup on the phone is placed in the top-left corner. 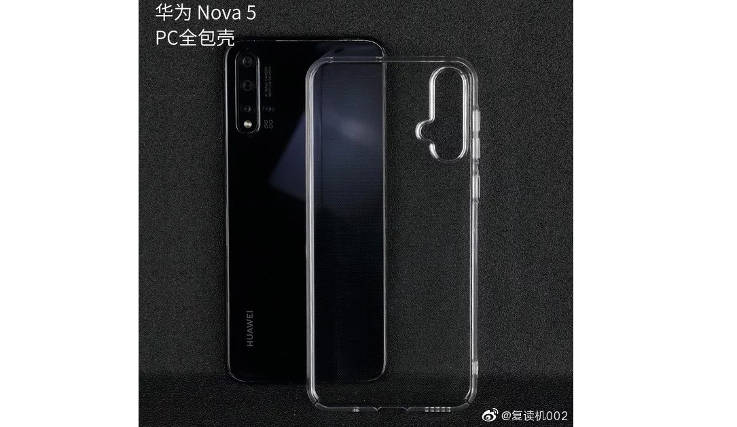 The Huawei Nova 5 is speculated to feature a 6.39-inch display with full HD+ resolution. It will be powered by Kirin 980 chipset. It could be featuring a triple camera setup on its rear with a combination of a 48-megapixel primary lens, a 12.3-megapixel wide-angle lens, and a ToF sensor. For the front, it will have a 25-megapixel sensor. The phone will be backed up 4200mAh battery with 40W rapid charging support.

On the other hand, the Nova 5i is expected to feature a 6.4-inch Full HD+ display featuring 1080 x 2310 pixels resolution. It will be powered by an octa-core processor clocked at 2.2 GHz coupled with 6GB RAM + 128GB storage and 8GB RAM + 128GB storage. It will have a quad-camera setup on the back with a 16-megapixel primary lens along with an 8-megapixel wide-angle sensor, 2-megapixel depth sensor, and a 2-megapixel Time of Flight (ToF) sensor. For the front, it is loaded with a 16-megapixel selfie shooter. It will be backed up by 3900mAh battery and it will run Android 9.0 Pie with EMUI 9.0 on top.

Huawei Nova 5i spotted on Geekbench with 6GB RAM