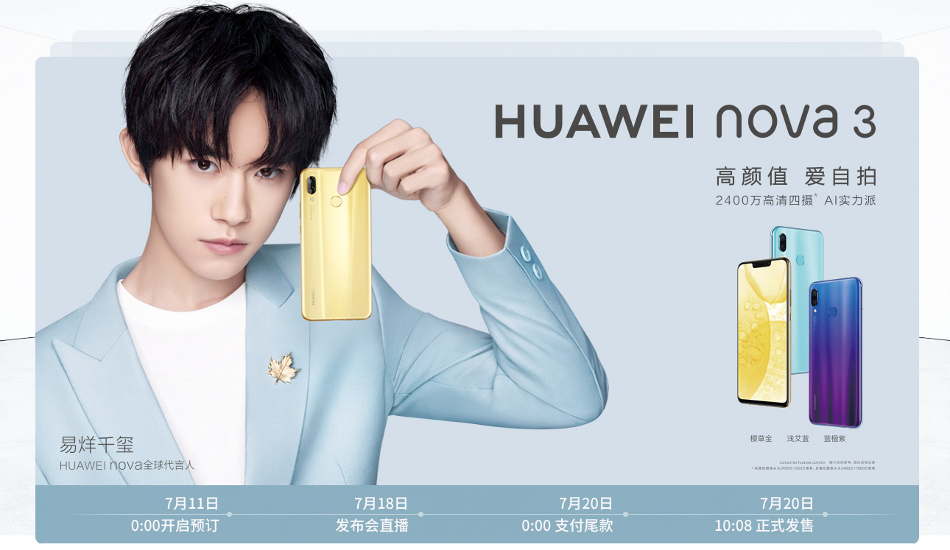 After the specs of Huawei Nova 3 were leaked in the morning today, the smartphone has now gone official in China. Huawei has now listed the Nova 3 on Vmall for pre-order but without pricing.

Huawei has already confirmed that it is going to officially announce the Nova 3 along with a new smartband, known as TalkBand B5 in China on July 18. The company is now expected to announce the pricing on July 18 after which the smartphone will go on sale starting July 20 in China. TheHuawei Nova 3 comes in Purple, Black, Blue and Gold colour variants.

Huawei Nova 3 features a huge 6.3-inch display with a resolution of 2340 x 1080 pixels and an aspect ratio of 19:5:9 with a display notch. The handset is fueled by an HiSilicon Kirin 970 octa-core processor that clocks at 2.36 GHz processor with Mali-G72 MP12 GPU. The smartphone has 6GB of RAM and internal storage of 128GB storage and 256GB expandable memory via a microSD card slot. It also has a fingerprint sensor on the back panel.