Huawei Nova 2s will be featuring a full-screen display with an aspect ratio of 18:9 and front-mounted fingerprint reader just like the V10.

Huawei’s sub-brand Honor recently launched its latest flagship device, Honor V10 in China. Now Huawei’s another smartphone which is dubbed as Huawei Nova 2s has surfaced online which has revealed a similar full-screen design as the V10 smartphone via leaked images.

Huawei Nova 2 and Nova 2 Plus smartphones were launched in May this year with dual real camera setup of 12-megapixel and 8-megapixel with LED flash. Now the leak of Huawei Nova 2s also shows that the device will come with dual rear camera setup. Moreover, the leaked images via GizmoChina suggests that Huawei Nova 2s will be a featuring full-screen display with an aspect ratio of 18:9 and front-mounted fingerprint reader just like the V10. 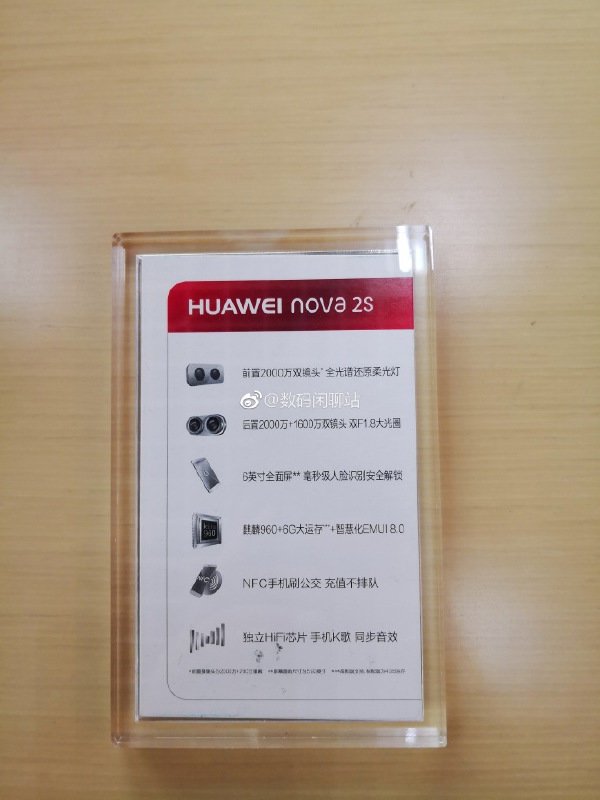 One of the leaked images has also revealed the key specifications of the Nova 2s. As per the image, Nova 2s will feature a 6-inch display. It will be powered by Kirin 960 Soc coupled with 6GB RAM. The device will also be boasting quad cameras. The dual rear camera will be a combination of 20-megapixel and 16-megapixel sensors while for the front, there will be a dual camera of 20-megapixel sensors. The smartphone will run on Android 8.0 Oreo operating system wrapped under EMUI 8.0. The smartphone will be equipped with facial recognition feature and NFC.

The leaked hands-on images of the Nova 2s have already surfaced recently. While earlier reports have claimed that the leaked device is Nova 3 while today’s leak has confirmed that the device will be Huawei Nova 2s.

As far as pricing is concerned, the Huawei Nova 2s is rumoured to be priced at 2,999 Yuan (~$454) and might launch in December.