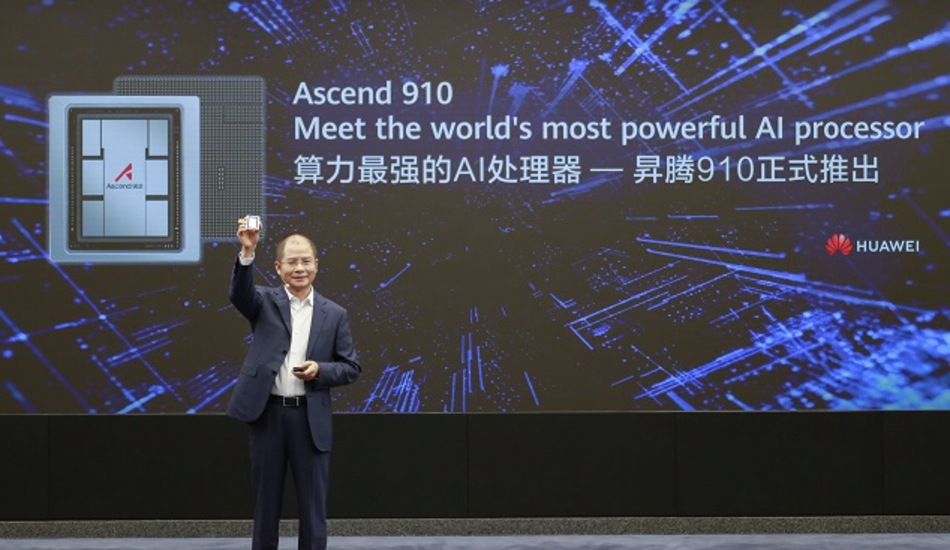 Ascend 910 is an AI processor announced under Huawei’s Ascend-Max series chipsets which will be used for AI model training. Huawei says the processor has passed a year of development and now has test results that show that the Ascend 910 can deliver on its performance goals with much lower power consumption.

At an event in Shenzhen, China, Huawei has officially launched the Ascend 910 which it says is the world’s most powerful AI processor. The company also announced an all-scenario AI computing framework called MindSpore for developing AI applications in all scenarios.

Starting things off, the Ascend 910 is an AI processor announced under Huawei’s Ascend-Max series chipsets which will be used for AI model training. Huawei says the processor has passed a year of development and now has test results that show that the Ascend 910 can deliver on its performance goals with much lower power consumption.

Upon testing, the Ascend 910 scored 256 TeraFLOPS and 512 TeraOPS in half-precision floating-point (FP16) operations and integer precision calculations (INT8) respectively. Huawei says while it planned to offer 350W of power to the Ascend 910, the processor was able to offer performance with a max power consumption of only 310W.

Huawei says it will continue investing in AI processors for more computing power that meets the needs of a broad range of scenarios including autonomous driving, training and edge computing. In a training session based on ResNet-50, the Ascend 910 and MindSpore managed to operate two times faster than other mainstream training cards that used TensorFlow.

MindSpore has built-in model protection technology to ensure that models are secure and trustworthy. The AI framework can be adaptable to all scenarios – across all devices, edge, and cloud environments – and provides on-demand cooperation between them. Additionally, the implementation of MindSpore will mean 20 percent fewer lines of core code.

Speaking about the announcement, Huawei’s Rotating Chairman Eric Xu said “We have been making steady progress since we announced our AI strategy in October last year. Everything is moving forward according to plan, from R&D to product launch. We promised a full-stack, all-scenario AI portfolio. And today we delivered, with the release of Ascend 910 and MindSpore. This also marks a new stage in Huawei’s AI strategy”.

Xu also disclosed that Huawei will announce more “groundbreaking” AI products at the Huawei Connect 2019 conference from September 18 to 20 in Shanghai.

Huawei confirmed that MindSpore will go open source in the first quarter of 2020. There’s no word on when the Ascend 910 AI processor will debut on upcoming devices.