Huawei FreeBuds debuts as a rival to Apple AirPods, offers twice as much playback time 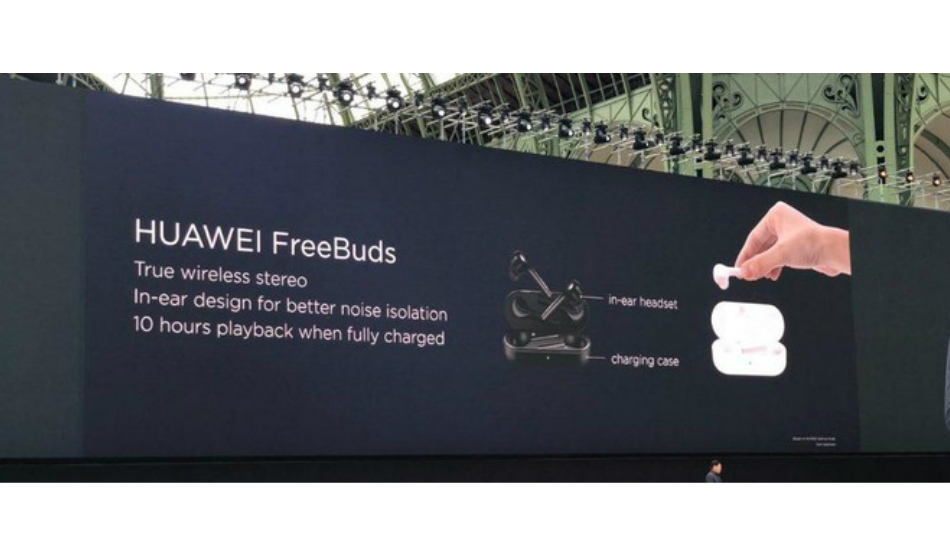 The arrival of FreeBuds comes after Huawei dropped the idea of a headphone jack on its flagship P20 lineup.

During the launch event of its P20 lineup and the Mate RS, Huawei also debuted with a range of new audio accessories, the most anticipated being the wireless earphones that it now calls the Huawei FreeBuds. The 159 Euros (approx. Rs 12,800) AirPods rival will be an attractive new addition to your accessories and comes in black, unlike its Apple counterpart.

Taking inspiration from Apple’s own set of wireless headphones, the Huawei FreeBuds looks a lot like the AirPods on first glance but offers more than what the Cupertino giant has to offer. For a change, the FreeBuds are available in black and white along with a charging case in matching colours. The new Huawei earphones offer ten hours of playback on a single charge which is twice as much as what the Apple AIrPods offer.

Like Apple, Huawei is also offering a carrying case which could act as its charger on the go. On a closer look, the orientation of the FreeBuds on its charging case looks different when compared to that of the AirPods where the ear pieces are placed vertically inside the box. In the case of FreeBuds, Huawei has taken a different approach by laying the earphones horizontally while it charges. The company has come out and claimed that the sound from its FreeBuds will offer a better noise cancellation and an overall sound than its competition, posing a direct challenge for the Apple AirPods.

It remains to be seen whether the FreeBuds will offer an easy-pairing solution alongside the Huawei P20 as is the case with the Apple AirPods. The Huawei FreeBuds will be priced at 159 Euros (approx. Rs 12,800) which is the exact same price of Apple AirPods in Europe. Alongside the FreeBuds, Huawei has also launched its new Active Noise Cancelling Earphones 3, a DAC Headphone Amplifier, a Moonlight Selfie Stick and the Huawei Band 2 Pro.