Recently Huawei SLA-AL00 was spotted on a GeekBench benchmarking website which was later launched as Huawei Enjoy 7 in China. Now another device bearing model number Huawei JMM-AL00 has also been spotted on the same benchmarking website. The listing has confirmed the some of the specifications of the upcoming smartphone. 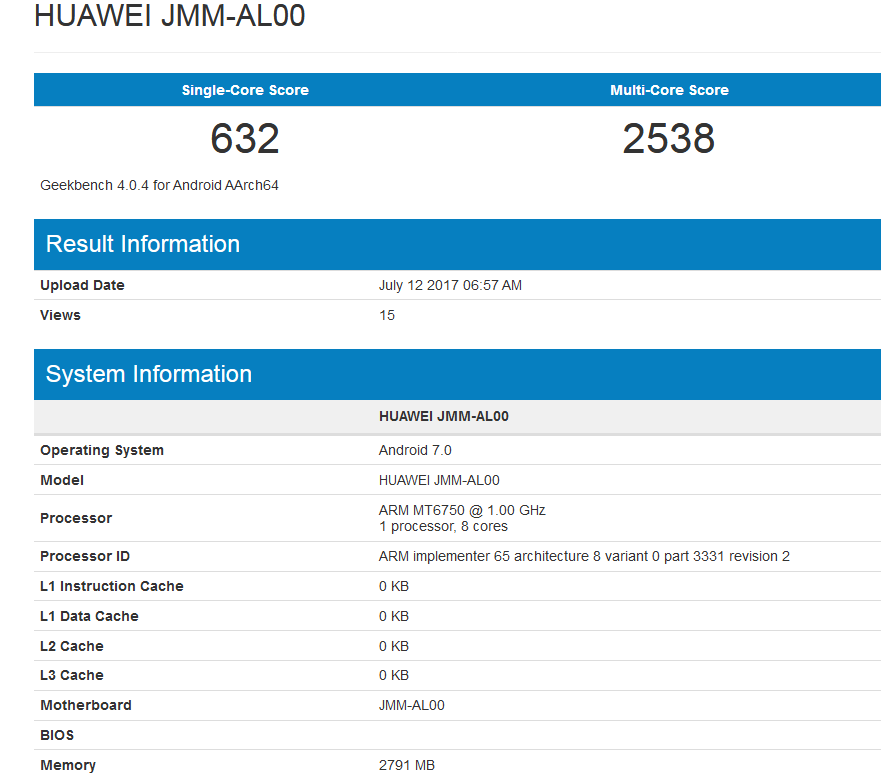 There is no information about the pricing and availability of the device as yet, however, given the fact that it has been spotted on GeekBench, it will not be much long before we see some new leaks revealing the pricing as well. So we request you to stay updated on our website for the same.

To recall, the Huawei Enjoy 7 features an all-metal unibody design and a 5-inch HD display with a resolution of 1280 x 720 pixels and comes equipped with quad-core Qualcomm Snapdragon 425 processor with Adreno 308 GPU, along with 3GB RAM and 32GB of internal storage. The device can hold expandable storage up to 128GB via microSD card. The smartphone runs on Android 7.0 Nougat operating system which is wrapped under EMUI 5.1 and is backed up by a massive 3020mAh battery.

On the camera front, the Huawei Enjoy 7 sports a 13-megapixel rear camera with LED flash light and phase detection auto focus and a 5-megapixel front-facing camera for selfies. The smartphone also houses a fingerprint scanner, which is placed on the back panel of the device. Besides, the smartphone offers 4G LTE, Bluetooth 4.1, WiFi, GPS and a microUSB port. The device measures 143.5 x 71 x 8.05mm and weighs 145 grams.

Lead Image is for representational purpose only.