HTC U12 Life pops up on Geekbench, confirms Snapdragon 660 SoC

HTC U12 Life will be powered by 1.61GHz Snapdragon 660 octa-core processor backed by 4GB of RAM. The Snapdragon 660 chipset is in contrary to the previous rumours suggesting Snapdragon 636.

HTC U12 Life recently announced its event for a launch of a new smartphone on August 30 in which it is expected to launch the HTC U12 Life. Now ahead of the launch, the smartphone has been spotted on the benchmarking website – Geekbench sporting the model number HTC 2Q6E1. The listing has confirmed some of the specs of the upcoming smartphone.

As per the GeekBench listing, the HTC U12 Life will run on Android 8.1.0 Oreo operating system. It will be powered by 1.61GHz Snapdragon 660 octa-core processor backed by 4GB of RAM. The Snapdragon 660 chipset is in contrary to the previous rumours suggesting Snapdragon 636. The device scored 1,343 in the single-core test and 4,897 in the multi-core test on Geekbench. 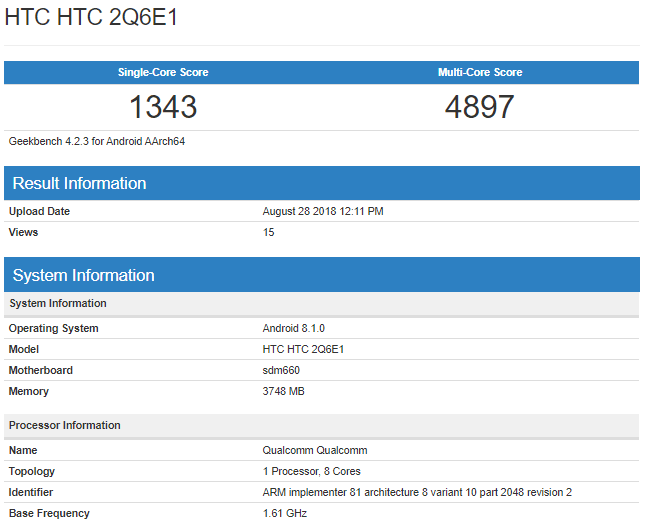 The U12 Life is the successor to the U11 Life launched last year with a Snapdragon 630 processor. As per the earlier leaks, the HTC U12 Life will come with a 6-inch, FHD+ display with an 18:9 aspect ratio. On the hardware front, a Qualcomm Snapdragon 636 processor along with Adreno 509 GPU will power the device. It will have a 4GB RAM, 64GB internal storage and an expandable memory via a microSD card slot. It will also have a fingerprint sensor.

An earlier report has also suggested that the phone will not be manufactured by HTC themselves. Instead, the company will outsource the upcoming phone to other ODM (original device manufacturer).

The HTC U12 Life is said to run on Android 8.1 Oreo and it will be backed by a 3600mAh battery. It will have dual rear cameras of 16-megapixel + 5-megapixel sensors with 4K video recording and a 13-megapixel camera with a selfie flash. On the connectivity front, you get dual SIM, Wifi, Bluetooth 5.0, and NFC support.

Note- The lead pic is for the representational purpose only.